Yukon’s Sarah Koltun of Whitehorse officially entered the record books on Saturday when she skipped her team to an 8-4 decision over Nova Scotia’s Emily Dwyer of Halifax in Draw 2 of the M&M Meat Shops Canadian Juniors in Napanee. This marks her sixth straight appearance at the Juniors as skip, eclipsing former record-holders Suzanne Gaudet of Prince Edward Island and Marie-France Larouche of Quebec, both of whom had skipped in five Juniors. 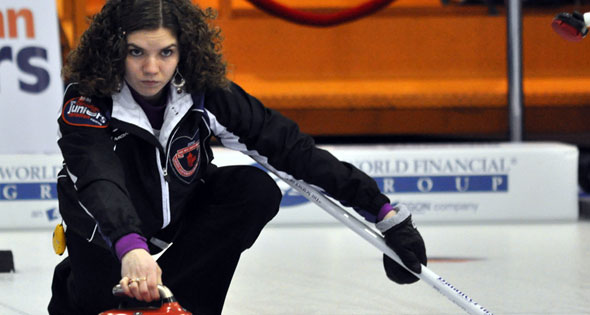 Considering Koltun is only 18-years-old, she’ll still be eligible for two more renewals of the Canadian championship, should she continue to qualify out of the Yukon. Her best record to date came last year, when finishing 6-6 in Calgary. But she’s come a long way from her Juniors debut in St. Catharines in 2007, when finishing with a 1-11 mark, only to go 0-12 in 2008 in Sault Ste. Marie. “That’s exciting (about the record),” laughed Koltun. “We (the team) feel pretty good. We just want to come out, have fun and just curl. We’re just excited to curl.” In the eighth end, Koltun’s team of third Chelsea Duncan, second Linea Eby and lead Jenna Duncan stole four to cement the win. “We ended up getting some rocks in really good positions, so it was tough for the other skip.” “Three of us have been away at school, so we haven’t really seen each other much. It’s kind of a different dynamic this time.” explained Koltun, who is attending Trinity Western University in Langley, while Chelsea Duncan and Linea Eby, who are also making their sixth consecutive appearance at the Juniors, are going to the University of Alberta in Edmonton. “We practice but we just practice by ourselves. We don’t get to practice together. The only time we practiced together was at Christmas break when we were all home and then just bonspiels on the weekends and stuff. Experience is always good to help us, but you never know what someone else is going to do.” Their Yukon male counterparts, skipped by Thomas Scoffin of Whitehorse, weren’t quite as successful in their first draw of the week, dropping an 8-7 extra end decision to Nova Scotia’s Stuart Thompson of Halifax. Scoffin, who became the youngest male to skip at the Juniors in 2007 in St. Catharines when 12 years old, is also making a sixth consecutive appearance as skip, equalling the mark set last year by Northwest Territories’ Colin Miller.

In other games, both Alberta teams continued to roll, now at 2-0. Edmonton’s Brendan Bottcher crushed Saskatchewan’s Brady Scharback of Saskatoon, 10-4 while Red Deer’s Jocelyn Peterman was an 11-2 winner over Saskatchewan’s Kristen Streifel of Saskatoon. Prince Edward Island also had a successful 2012 debut, as Cornwall’s Sarah Fullerton beat Northwest Territories’ Taryn Williams of Yellowknife, 11-4, while Alex Matters’ Charlottetown team proved an 11-2 victor over Daniel Murray’s Territories squad from Yellowknife. Manitoba’s Shannon Birchard of Winnipeg edged Northern Ontario’s Kendra Lilly of Sudbury, 6-5, taking two in the 10th end, while Northern Ontario’s Brennan Wark of Thunder Bay was a 5-3 winner over Manitoba’s Kyle Doering of Winnipeg. Play continues with Draw 3 this evening at 7:30 pm at both the Strathcona Paper Centre and Napanee & District Curling Club, following the official Opening Ceremonies at 6:30 pm at the Arena.