Saskatchewan curling’s dark horse will be riding into Saskatoon for the 2012 Tim Hortons Brier when it’s held at the Credit Union Centre from March 3-11. 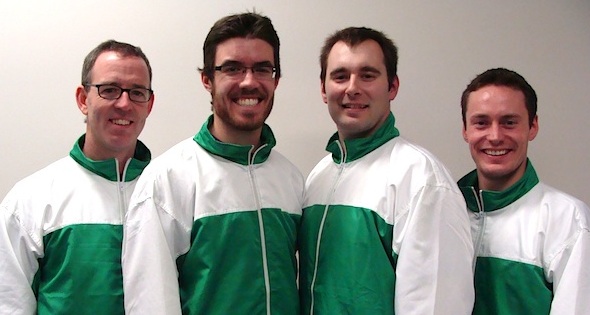 Scott Manners and his previously unheralded Battleford Curling Club teammates Tyler Lang, Ryan Deis and Mike Armstrong claimed the Brier berth by stealing the SaskTel Provincial Tankard in Assiniboia on Sunday, February 5. The first-year Manners foursome manufactured single point steals in the tenth and eleventh ends of the championship final against three-time provincial champ Bruce Korte in a 6-5 win. The defeat was a tough pill to swallow for Korte and his Saskatoon Granite Curling Club team of Dean Kleiter, Roger Korte and Rob Markowsky, who seemed to be in control of the game prior to those last two fateful ends. Sixteen rinks from across the province started the championship final playdowns when competition got underway at the Assiniboia Curling Club on Wednesday, February 2. With names in the field like Laycock, Bitz, Moskowy, Bryden and Korte, it was easy for the Manners team to go unnoticed. That all changed as the competition progressed. In the A vs. B Page playoff game on Saturday night, Manners and his youthful support crew played like grizzled vets in tripping up Korte and company by a score of 7-6. The game was a back and forth affair that went to an extra end before the Battleford foursome prevailed. At the same time, in the C1 vs. C2 Page game, Regina’s Jamie Schneider sent Carl de Coninck Smith and his team of Jeff Sharp, Chris Haichert and Jesse St. John to the sidelines by stealing 4 in the third end and scoring 4 more in the fifth on the way to an abbreviated 10-3 rout. With the Manners team nicely ensconced as championship finalists, there left but one game to determine their opponents in the Sunday afternoon shootout. The Korte foursome had beaten Team Schneider by a score of 9-5 in earlier A flight action and Sunday morning’s semi-final would provide the perfect forum for a rematch. With Jamie Schneider calling the game and throwing third rocks and brother, Rick throwing fourth, the Tartan Curling Club team featured Curt and Shannon England pushing the brooms on the front end. Trailing 5-2 at the midpoint, the Regina boys scratched their way back to tie the game after seven ends, only to see Korte execute a timely double for 4 in the eighth on the way to a 9-7 victory. For Jamie Schneider, who had hoped to return to the Brier for the first time since 1990, it was the end of the road, while for Korte it was on to the final and an ill-fated date with destiny. The Manners rink will attempt to win Saskatchewan’s first Brier championship title in over 30 years when play gets underway at the 2012 Tim Hortons Brier in Saskatoon in March. Rick Folk, who curled out of that city’s Nutana Curling Club, was the last skip to turn the trick when he captured Canadian and world championship honours in 1980.