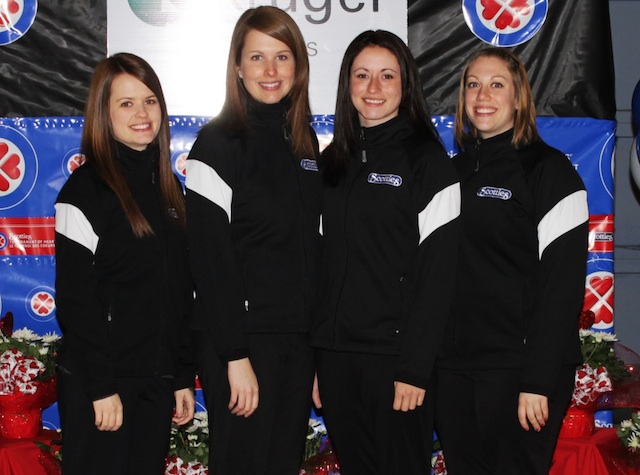 Horgan scored her victory over defending provincial champion Rachel Homan, who picked a bad time to lose her first game of the week-long event. Homan and her Ottawa Curling Club team of Emma Miskew, Alison Kreviazuk and Lisa Weagle controlled the final game 5-2 after five ends and 6-5 playing the tenth with the hammer, when things went awry. Misfires on Homan’s last two rocks resulted in a timely steal of 2 and a 7-6 victory for the Sudbury crew. Ironically, Homan had built up her mid-game lead with steals of one in both the fourth and fifth ends. Homan dominated round robin play with a record of 9-0 before earning a trip to Sunday’s final by stealing single points in the eighth, ninth and tenth ends in a 5-3 win over Horgan in the Page 1 vs. 2 game. Horgan and her youthful teammates, who had finished preliminary play with a 7-2 record, were quick to bounce back from their first playoff setback. They never trailed in a 7-3 semi-final win over Scotties vet Sherry Middaugh on Sunday morning. Middaugh and her Coldwater & District Curling Club team of Jo-Anne Rizzo, Lee Merklinger and Leigh Armstrong had previously sidelined Fort William’s Krista McCarville in the 3 vs. 4 game after both teams finished the round robin with 6-3 records. McCarville, a four-time Ontario champ, gave up a score of 2 in the eighth end and a steal of 2 in the ninth in the 5-1 loss. She had been supported by Ashley Miharija, Sarah Lang and Liz Kingston throughout the championship, which was contested at the Kenora Curling Club. While the twenty-five-year-old Horgan will be the youngest skip in the Red Deer field, she does not lack national championship experience. She is a three-time Northern Ontario junior champion and has a history of always returning home with a winning record. The 2012 Scotties Tournament of Hearts gets underway February 18-26 at Westerner Park in Red Deer, Alberta.