Youth Olympic Dreams: The Journey Comes to an End

As I sit here writing my final column, I’m reminiscing over the last ten months, and how much of an impact they have made on my life. On March 15, 2011, at around 9:30pm, I got the call of a lifetime. Greg Stremlaw (CEO of the Canadian Curling Association) was on the line, and had called to congratulate me on the position I had earned on the Canadian Youth Olympics curling team. And that’s where my journey started. 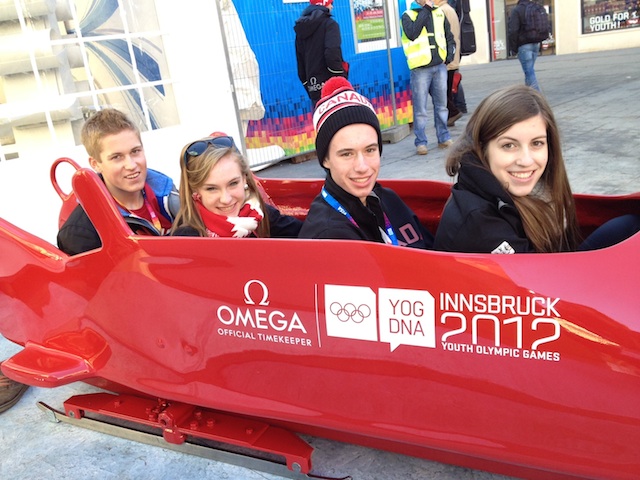 In April, I said the hard good-bye to my mom as I boarded a plane for the first time by myself destined for Regina, where I met my new teammates. Stepping off the plane in Toronto just over one week ago was a hard good-bye as well: it was the last time we would be travelling not only as a team, but as Team Canada. Even though it was a quick, and slightly rushed good-bye, it did not take away from the amazing experience we had in Innsbruck. Derek, Thomas, Helen and I arrived in Innsbruck first. Corryn was competing in provincial playdowns so she was joining us the next day. To say the view was amazing was an understatement, and it was even cloudy out! Throughout the rest of the week, up until Friday, we did a lot of sight seeing. We went up into the mountains and got a great view of the city, then headed up to the ski jumping venue at Bersigel to check out where the Opening Ceremonies were to be held Friday night. The time seemed to fly by! We finally got some ice time, and it felt amazing. The rocks and ice were really good and we were ready to play. That night we were all bussed to Bersigel for the Opening Ceremonies. Corryn, being the Team Canada flag bearer, headed up at a different time and wasn’t with the team until about half way through the ceremonies. The ceremonies were two hours long (and involved lots of standing!) and ended with a massive fireworks show. The next morning we were ready to play, but a power outage through the night postponed our game. We were disappointed that we couldn’t play, but we spent an hour at the venue playing football and hanging out with our families, then headed back to the village to prepare for the next game. 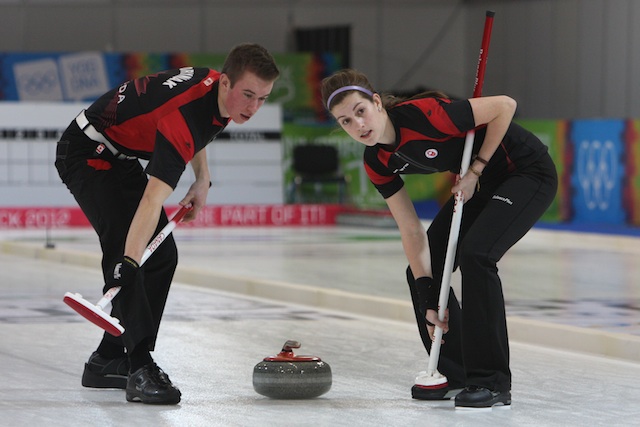 Our loss to Austria on that first day just made us want the win more. We had an amazing record throughout the week, with just one more loss in an extra end against Sweden. It was really good to have a bit of a challenge, including the mental challenge of having to play in the extra end. We finished the round robin with a 5-2 record, coming in second place for our pool. In the cross overs we played the Czechs, and it was a battle until the end. We did pull out another win which put us into the semi-finals against Italy. Unfortunately, Italy was on fire and we just had an off game. It was really hard to kiss our gold medal dreams away, but after a while we realized that there was still a medal to be won, and we were going to do it. We came out against the Swedes with a desire and will to win. We took two in the third, but we gave up a hard three in the fourth. Coming back from a three-ender is probably one of the toughest things to do in a tight game, but we still pushed on. Coming home in the final end we were up one without hammer. At that point, we had accepted the fact that we would probably be playing an extra end, but we just could not let them get two. Things were getting edgy when Thomas came down to throw his last shot. Sweden was facing two and we had to hit something. And, with fine style, Thomas made an awesome double! With just one far corner guard, Sweden drew behind, landing in the back of the eight foot. And again, Thomas made a great shot and froze to it. The Swedish skip only needed to hit half the eight foot to get the point and force an extra. It was probably the most nerve-wracking thirty seconds of my life waiting for their skip to go to the other end of the ice and throw his rock. As soon as it left his hand all three of the Swedish players started sweeping, and the mate soon came out to help. Their rock stopped – just two inches short from being shot. We had won! 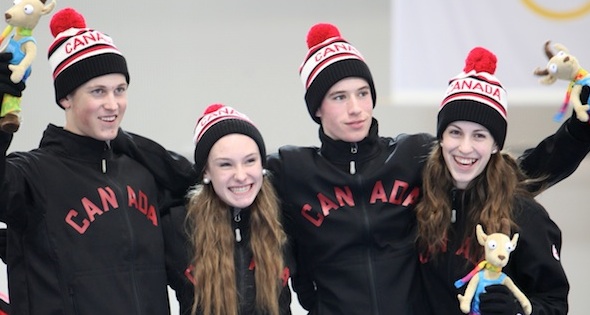 Thomas immediately gave me the biggest hug! I started shaking the other team’s hands but Derek got to me with another huge hug before I could finish. After handshakes, we did a group hug. It wasn’t gold, but winning that bronze felt pretty amazing. Helen came out from the coaches’ bench and gave us all hugs too. We had to get ready for our mascot ceremony, but I also made a quick run over to the sidelines to see my family. The next day we were supposed to get our medals but the ceremony was postponed until after the Mixed Doubles competition. Unfortunately I was eliminated in the first round of Mixed Doubles, but that meant I could spend some time with my family. We finally got our medals on Sunday, and it was so worth the wait! My grandfather hadn’t been able to make it to the final game, so I made sure once we got to see our families that I showed him the medal first. He was so proud of me. It really meant a lot to me for him to be there. We then headed off to the Closing Ceremonies, which was just a quick half hour ceremony followed by a dance. The next morning was an early one, and we headed off to Munich Airport. We did have some difficulties getting out, but after a 26-hour delay, we finally got in the air. It felt amazing to be home again. As great as Innsbruck was, two and a half weeks is a long time to be away, and it was good to see my friends and family. 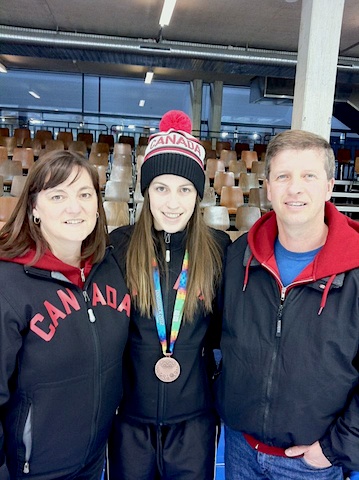 Emily with her proud parents after the medal ceremony in Innsbruck (Photo E. Gray)

Since getting home, things have settled down. My curling club had a celebration party for me. I have started to get caught up in my studies, and I think I can finally put my medal in its box and leave it there for more than six hours! As the end of this journey approaches, I’d like to thank some people. First of all, a huge thanks to the Canadian Curling Association for supporting us throughout this journey. Without the opportunities the CCA provided us with, I do not think we could have reached our podium goal. Thanks to my teammates Corryn, Derek and Thomas. I couldn’t ask for three greater athletes to call not only my team, but my family. We have become so close over the last ten months. I feel as if you are my brothers and sister. I am truly going to miss you guys and I hope to see you at Nationals sometime. Thanks to our coach, Helen Radford. You fit right in with our family as our ‘travel mom’. You offered us so much of your expertise, and I think I speak for the team when I say it helped us the whole way. You were a great coach and I’m sure since we both come from the Martimes, I will see you again somewhere along the road. To my family and friends, thank you for all your support. It was really great getting little text messages or messages on Facebook throughout the week wishing us good luck and congratulations. And last, but not least, thanks to my mom. She has been with me the entire way – years ago going out on the ice and watching me slide until I got it right, until now, freezing on the ice with me almost three times a week, just to watch my line and run through drills with me. I really couldn’t have done it with all your help and support, and a big part of this bronze medal goes to you! It is kind of sad writing this last column, but having these memories to read in years to come will allow me to relive the journey, complete with its joys and laughs! 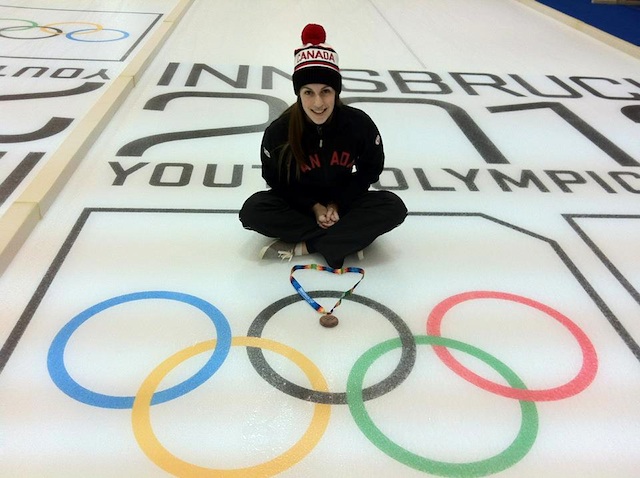