Fit For Curling: No place for flab in today’s game

It’s a question that has dogged curling for generations: are curlers athletes?  The image of the beer-swilling, chain-smoking, pot-bellied curler (just think of Homer Simpson with a brush) has been around longer than artificial ice. There was a time, in fact, that ashtrays were available at the end of each sheet, and it wasn’t uncommon to have a beer while playing. 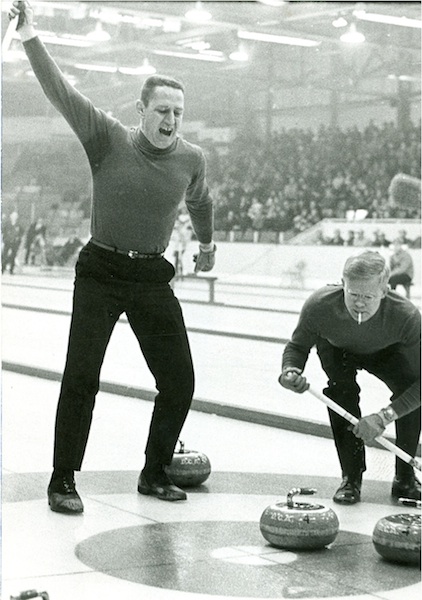 Fred Storey (left) celebrates and Ernie Sparkes sweeps - cigarette firmly in place - while playing with the Ron Northcott team at the 1968 Brier. It wasn't until 1980 that smoking was disallowed on the ice at the men's championship (Photo courtesy Warren Hansen)

So what’s the deal? Is curling really a sport, or a quaint pastime sharing space with the likes of bowling, darts and billiards? On one level, the game is still social in nature and can be enjoyed by all ages and skill levels. That has always been one of the appealing aspects of the sport. There can be no question, however, that the men and women who play the game at the highest level today are, indeed, athletes. Stronger, sleeker, fitter — today’s top competitive curlers are in the best shape ever, physically and mentally, and the evidence is on display at any of the major curling competitions in Canada or on the world stage. Many of the world’s best curlers wouldn’t look out of place in a men’s or women’s downhill ski event, or on a marathon course. The transformation of competitive curlers over the decades is one that Warren Hansen, the director of competitions for the Canadian Curling Association, is glad to see. “Some of the age-old myths that curling is easy and you can drink and smoke and do everything else, that really isn’t the case if you are participating on a regular basis now,” says Hansen. “It’s more evident that [fitness] has become very important for top players.” Hansen ought to know. He was a vanguard regarding fitness techniques back when he curled in the 1960s. He always knew the competitive value of being in shape. As one of the strong-armed sweepers on Hec Gervais’s crack Alberta teams, he was a physical specimen. “Certainly when I was playing on the front end I was preparing all the time, lifting weights,” he says. “Because with corn brooms, if you didn’t have that endurance, your sweeping wasn’t going to be very effective. There were people at the top level who weren’t very effective because they weren’t physically fit enough to sustain 12-end games, occasionally three times a day. “You have to keep fit. If you don’t, you’re going to slip behind.” 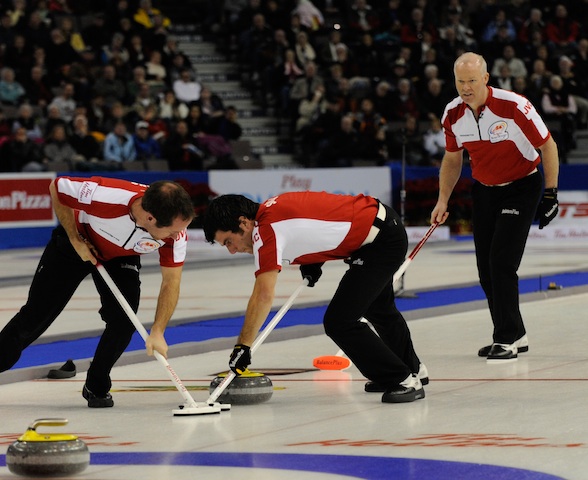 Glenn Howard, one of Canada’s top skips and a three-time world champion, agrees. “It’s not an old-man, beer-drinking sport anymore. Fitness is the key now,” says Howard, who is 49 but keeps himself in peak physical shape. “We sort of got away with [lack of training] in the past, but now you can’t get away with it any more.” There’s little doubt about when fitness came into focus. Curling’s acceptance into the Olympics as a full-medal sport in 1998 in Nagano, Japan, turned thinking around on a dime. Suddenly, curlers were looking for any edge, and fitness was one of them. “Curling being part of the Olympics was a major contributing factor towards a whole different attitude about how they prepared mentally and physically for competition,” Hansen says. Shannon Kleibrink, one of Canada’s top female skips, never needed to be convinced that fitness was a good thing for her game and perhaps a ticket to the Olympics. She’s always understood the link between fitness and performance. “It’s huge,” says Kleibrink, who won a bronze for Canada at the 2006 Winter Olympics in Torino, Italy. “A team that is fit and has done its mental preparations probably has an edge on other teams.” 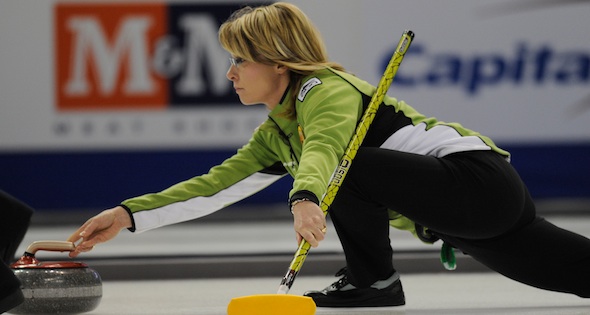 Shannon Kleibrink: “A team that is fit and has done its mental preparations probably has an edge on other teams.” (Photo Michael Burns)

Kleibrink, who has a physical education degree and curls out of Calgary, says every member of her team is on a fitness regime with a personal trainer. “We’ve always done it,” she says. The CCA has been encouraging the country’s best curlers to get fit for years, and has provided the tools to help them achieve their goals. “Fitness is crucial in today’s game,” says Bob Comartin, the lead strength and conditioning specialist with the National Team Program for the CCA. “Not only do front-enders need upper body strength and power to sweep a rock, but also the endurance to play several games per day, several days per week. “This is where fitness impacts the back-end players as well. Fitter back-end players are able to handle the mental stress of competition better than their unfit counterparts. Better leg strength also helps reduce strain on their knees, thus preventing injuries.” Comartin doesn’t work individually with Canada’s top players. He is, however, a reference for trainers, athletes and coaches who are looking for guidance in the area of injury prevention and fitness development. He also facilitates National Coaching Certification Program (NCCP) coaching courses and speaks at various provincial coaching workshops on the subject of fitness and training. Comartin, who started working with Team Kelly Law back in 1999, says a fitness regimen should be tailored to each individual. “A fitness session should specifically address the athlete’s weaknesses and needs,” he says. “Test, train, retest should be the typical protocol for trainers. An ideal session combines elements of pre-habilitation and bouts of high intensity activity mixed with recovery time. “Pre-habilitation addresses the athlete’s specific weaknesses and seeks to improve areas commonly stressed in the game. High intensity bouts can include weight lifting, sprinting, or plyometrics (a type of exercise training designed to produce fast, powerful movements), mixed with appropriate rest intervals. The combination of these activities reduces the risk of injury and builds a better athlete for the game.” And fitness is good for more than just the game’s top players. Comartin says better fitness is good for average club curlers, too. “More and more, average club curlers are benefiting from their exercise routine,” he says. “The greatest benefit is in reducing aches and pains and being able to keep playing at an older age.” The message in curling today is clear: You don’t have to be ‘cut’ to play, but you had better be in shape to play the game at the highest level. 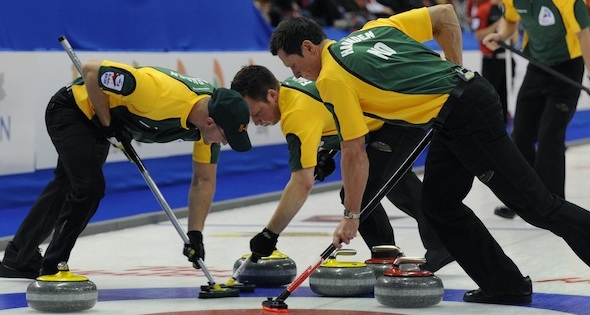