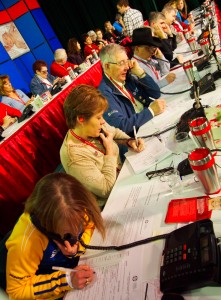 The phones were ringing at the 2012 Sandra Schmirler Telethon (Photo: Lisa Shamchuk)

A number of people who knew Sandra Schmirler well are involved with the foundation, and come out annually to the telethons to show their support and lend a helping hand. Accomplished curler, and former National Coach who worked with Sandra Schmirler’s team, Lindsay Sparkes is currently an Honourary Director of the Sandra Schmirler Foundation. When asked what it means to volunteer her time every year for the cause, Sparkes replied, “It fills my heart to do this every year. You just know you’re doing the right thing.” Also answering phones was Marcia Guderiet, lead for Sandra Schmirler’s team, who is involved with the foundation as an Honourary Ambassador, and comes out every year. “It’s part of my responsibility. I was lucky enough to play with Sandra.” This year’s telethon saw a number of people from the local community come together to man the phone lines. Red Deer city and county mayors, staff and board members of the Red Deer Regional Health Foundation, nurses and doctors from the Red Deer Regional Hospital Centre’s Neonatal Intensive Care unit, representatives from TD Canada Trust and Central Alberta Co-op, as well as curlers and representatives from both the Sandra Schmirler Foundation and Canadian Curling Association. In the end, the local response was so great there were more volunteers than phones! One local volunteer, also taking telephone donations, was Carol Murray, vice-president of the Red Deer Regional Hospital Centre. “Phones were ringing fairly regularly. Everyone is so receptive and eager to support. Everyone’s got a story.” She was also supervising a small team of nurses from the Red Deer Regional Hospital Centre’s Neonatal Intensive Care Unit who had come out to demonstrate an electroencephalogram (EEG) machine. 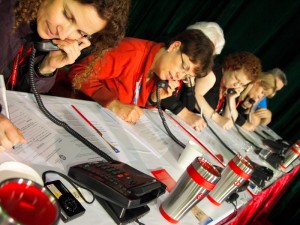 Another local volunteer, Carole Edmonds, whose husband is on the Red Deer Regional Health Foundation board, was having a great time taking donation calls remarking: “It’s been great! My first call was from Newfoundland, so far away!” His Worship, Morris Flewwelling, Mayor of Red Deer was busy answering calls from all over the country, and noted the importance of participating in the telethon. He commented, “It gives everyone an opportunity to get involved, from Red Deer and the wider community and country. It’s been great fun. It’s nice to see how generous people are.” Also answering phones was the Deputy Mayor of Red Deer County, His Worship Richard Lorenz, who similarly noted “It’s huge for our region. It’s a great cause.” Jody Meli, Chair of the Sandra Schmirler Foundation, echoed both Mayors’ enthusiasm, saying, “There’s been lot’s of excitement in the community. We’ve had lots of local support.” Mayor Flewwelling cited a related connection between the Red Deer Regional Health Foundation and the cause of the Sandra Schmirler Foundation. Established in 1990 to commemorate the official opening of the Red Deer Regional Hospital Centre’s pediatric unit, as well as Her Majesty Queen Elizabeth II’s visit, the Queen Elizabeth II Scholarship is awarded annually to a local individual who is pursing advanced education by specializing in pediatrics or neonatology. Funds raised from this year’s telethon will further assist the quality care provided in this and other neonatal intensive care unit. Fans can still make a donation by visiting SandraSchmirler.org or by calling 1-866-210-6011.