Everyone coming into the arena for the 2012 Scotties have been touched in some way by the amazing team of volunteers. There are over 500 volunteers here in Red Deer – many are locals but others have come from nearby towns, cities, or provinces to give their time to the event. Volunteer duties include tasks such as set up and take down, hosting, promotions, 50/50 sales, security, accreditation, merchandising, information booth and working in the HeartStop Lounge. 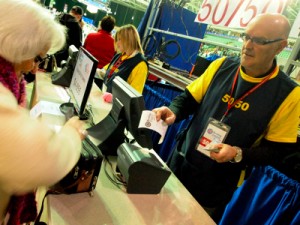 One local volunteer from Red Deer, Gary Brown, has been selling 50/50 tickets. He was recruited by his curling club, the Red Deer Curling Centre, which is in the midst of construction and renovations. Half of the money raised via 50/50 sales at this event will go to the Centre. When asked why he got involved as a volunteer for the Scotties, Gary replied “It’s a great cause! And it’s a family affair: my wife is here selling 50/50s too.” Like many people who attend or volunteer for curling events, his favourite part has been “meeting a whole bunch of new people. Everyone is so friendly. Curling is so good for that….I’d recommend volunteering to anybody. It’s a good way to get involved in the community.” Manning the information booth during Monday’s afternoon draw was Linda Peyton and Eileen Schultz, both from Red Deer, and Carol Plumb, from Rimbey. All were recruited by their curling clubs. Besides helping people navigate around the venue, they often recommend restaurants, and give out directions and maps. Carol’s favourite part about volunteering is “meeting the people, players and parents of the players. It’s great. This group of curlers and parents are just the nicest people. They make a point of saying ‘Hi’.” Linda commented having the event in town was good for the community: “I’m thrilled and so proud of having it in Red Deer. The stands are full!” Eileen agreed, “It puts Red Deer on the map. I’ve met people from all over!” Linda’s favourite part has been “the ambiance, it’s so exciting. I’m just happy to be here and take it all in.” 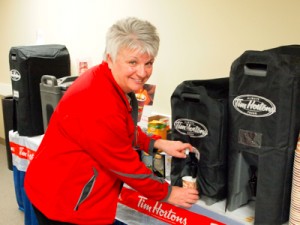 Nancy Numan, from Sylvan Lake, is working for Security and Accreditation. She was watching over the action in the HeartStop Lounge on Monday, but was also previously involved with getting all the curlers accredited. She commented “Seeing all the teams checking in through accreditation, and then to see them on the ice – that’s pretty exciting!” She too has been enjoying meeting people and being part of the volunteer team: “It’s awesome. Everyone is friendly. Volunteers are putting in long hours, and it’s neat to see it all happen.” Volunteers walking into the volunteer lounge for a drink, snack, break from their shift or to watch some curling on the TV were greeted by the “Queen of the Volunteer Lounge”, Lenore Berkeley from Jarvis Bay. When she heard about the opportunity to volunteer from the Sylvan Lake Curling Club, she thought “It sounds like fun. It sounds like spending time with people. Volunteers are a special breed: they’re friendly. They do this for free.” She spends her shifts in the Volunteer Lounge, or another of the many lounges on site, greeting people and making sure the drinks and snacks are filled up and tidy, ready for the volunteers or curlers or media or sponsors to enjoy them. “I love being able to chat with people, find out what they’re doing, how their shift is going. When you retire and have time, this is fun!” Her favourite part so far has been “the opportunity to see high calibre curling. I got up close to the curlers. I’ve never watched a major event live. These young women just make curling a sport you want to watch. It’s exciting. They make incredible shots!” 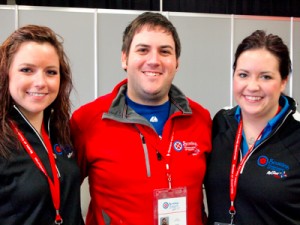 Brittany Baker, the Volunteer Director and Supervisor of Bar Services came on board as a last minute replacement, and brought with her Lauren Walsh and Dave Lachance. Dave commented he knew he was taking part in a national event because there’s “definitely a lot of energy. Volunteers are excited to be here and put in the time.” Brittany really appreciates her volunteers: “They’re awesome! They’re so helpful. From the week of set up, you see everything built up. It’s amazing to see the community come together.” Brittany, who didn’t know much about curling before, further remarked, “I’d love to do another event at some point. I’ve been telling everyone that it’s so cool – you get to meet so many awesome people. I would like to get more people our age involved. It’s a blast!” People interested in volunteering for future Canadian Curling Association events should follow curling.ca.