Thirty-two teams from across the province started play at Credit Union Place Arena in Dauphin on February 8 in pursuit of the Manitoba Men’s Safeway Championship title. 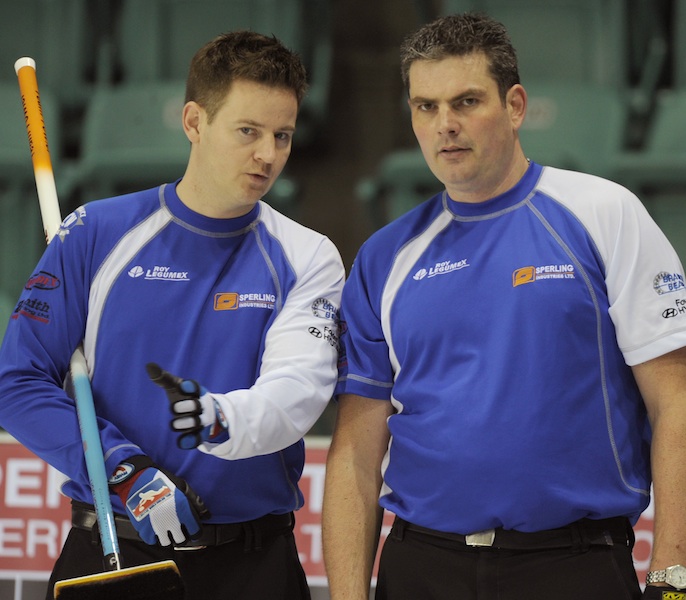 On the 12th of February, one team stood tall on the victory podium. Rob Fowler and his Brandon Curling Club team of Allan Lyburn, Richard Daneault and Derek Samagalski outlasted, outwitted and outcurled all comers in winning the Purple Hearts and the resultant trip to the 2012 Tim Hortons Brier, which will be contested in Saskatoon from March 3-11. Fowler, a three-time Brier vet, played giant-killer on the way to the championship. He capitalized on steals in the third, fourth and tenth ends in upsetting Mike McEwen and his Fort Rouge teammates B.J. Neufeld, Matt Wozniak and Denni Neufeld by a score of 10-6 in the final. For McEwen, ranked number one atop the World Curling Tour’s leaderboard, it was the third straight year he had suffered a Manitoba final game loss. Two games previous, the Fowler foursome ousted defending Manitoba, Canadian and world champion Jeff Stoughton and his Charleswood team of Jon Mead, Reid Carruthers and Steve Gould in the Page playoff elimination game by a score of 8-7. Tied after nine with the hammer in his hand, Fowler scored the necessary single point for the win in sending Stoughton to the sidelines. At the same time as Fowler was subduing Stoughton, the McEwen rink was earning a bye to the championship final by tripping up Deer Lodge’s William Lyburn and his support staff of James Kirkness, and Alex and Tyler Forrest by a score of 7-5. With the loss, Lyburn would be forced to play the Fowler team, which featured his older brother Allan, in the semi-final game on Sunday morning in an attempt to get another crack at McEwen. In a tightly contested penultimate showdown, a steal of a single point in the seventh end by the Fowler team was the determining factor in a game that finished 6-5 in favour of the boys from Brandon. Fowler, who curled second for Stoughton in three national men’s championships, will be making his first appearance as a skip at the Saskatoon Tim Hortons Brier. Daneault will be making his second Brier appearance, while Allan Lyburn and Derek Samagalski will both be first-timers.