Three fun facts about Germany: You can drive 300 km an hour on the Autobahn. There are over 1,500 different brands of beer available throughout the country. Every February, Andrea Schopp will be crowned Germany’s women’s curling champion. Well, not every year; she has missed out on three of the last twenty-five titles. 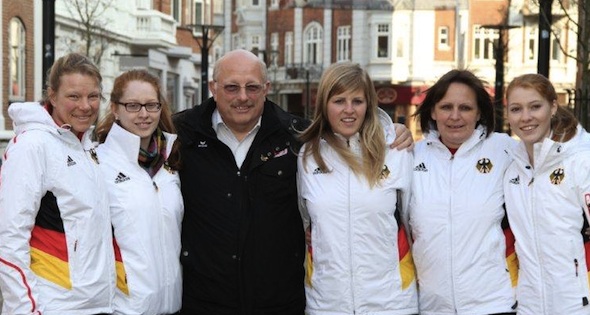 This year, Schopp and her SC Riessersee team of Imogen Oona Lehman, Corinna Scholz and Stella Heiss went undefeated in the four-team double round-robin national championship which was held in Garmisch-Partenkirchen from February 17-19. Daniela Driendl and her team of Martina Linder, Marika Trettin and Analena Jentsch finished with a record of 4-2, while teams skipped by Juliane Jacoby and Ann Kathrin Bastian completed play with records of 2-4 and 0-6 respectively. Schopp has arguably been the world’s most passionate competitive curler for most of her life. She first appeared on the international curling scene in 1980, when, as a 15-year-old, she skipped Germany to a bronze medal in the European Curling Championships. Since then she has claimed seven European titles; the 1992 Olympic gold medal, when curling was still a demonstration sport; and two world championships. In Glasgow in 1988, she claimed her first world title with a final game, 9-3 win over Canada’s Heather Houston. Twenty-two years later in Swift Current, Saskatchewan, she won the 2010 Ford World Women’s Curling Championship with an exciting, extra end 8-6 championship final victory over Scotland’s Eve Muirhead. Schopp’s resume also includes two silver medals and a bronze in women’s world championship play. Last year in Esbjerg, Denmark, Schopp, Lehman, Scholz and Monika Wagner finished with a record of 5-6 at the women’s world-title tilt. Wagner, who played second on both of Schopp’s victorious world championship foursomes, will make the trip to this year’s event as the team’s fifth player. Germany can’t deliver the Autobahn or 1,500 brands of beer to Canada, but Andrea Schopp is guaranteed to be in the house for the 2012 Ford World Women’s Curling Championship, when play gets underway from March 17 -25 at the ENMAX Centre in Lethbridge, Alberta.