Scotties Spotlight: Fans in the Stands

The Scotties Tournament of Hearts, or any other major curling event, wouldn’t be a success if it weren’t for the fans that come out to support the sport. Nancy Watt, from Eckville, AB, brought her granddaughter Elida Heck, age 6, to watch the afternoon draw. When asked why she came to watch today, Elida enthusiastically stated “I like curling!” Nancy followed up with “Ever since she was little she’s watched curling with grandma.” They were excited to watch a major competition live, and Nancy thought the atmosphere, and especially the crowd this week, was “hyped up and excited!” 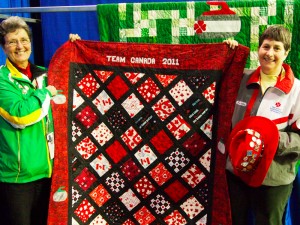 Sue Amundrud, from Melfort, Saskatchewan, is attending her tenth Scotties, and has been displaying two quilts on the railing behind her seat. She’s a quilter, and started making quilts in Saskatchewan colours a few years ago, as a way to cheer for her team, like waving a flag. If Saskatchewan makes the playoffs, she gifts the quilt to the team, as she did in 2009 for Team Stefanie Lawton and in 2011 for Team Amber Holland. This year she made a second quilt for Team Canada, and plans to give it to them later this week. Last year, Sue made a 30th Anniversary quilt for the Scotties, which hung all week in the venue in Charlottetown. At the end of the week, she gave it the long time sponsor, Kruger Products, to display in their head office. Sue keeps coming back to watch the Scotties because she “likes cheering for the girls. I’ve gotten to feel that I know the players. I’ve met some good friends that I see every year. You make a lot of friends at these events.” Sitting in front of Sue this week is her long time friend France Isabelle, who is attending her twenty fifth Scotties. She doesn’t cheer for any team specifically because “Through the years you get to know all the teams. I cheer for all the good shots. I want the winning representative to be someone who will do well at Worlds and represent the maple leaf. Sportsmanship is as important as ability. We can all achieve the same level of success in the sportsmanship part.” Every year, France brings a new cowboy hat, and covers it in pins and curlers’ autographs. France also mentioned that Sue made a third quilt this week, for the Sandra Schmirler Telethon, held last Sunday. The quilt was displayed in the telethon area and was auctioned off on Twitter. France actually ended up with the winning bid, and has arranged with former Team Schmirler lead, Marcia Gudereit, to have it donated to The Schmirler Display at The Biggar Museum and Gallery in Biggar, Saskatchewan. 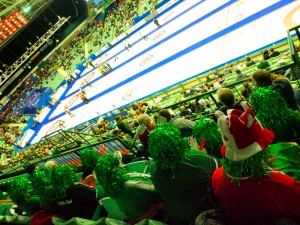 Brenda Bower and her friends are hard to miss! (Photo: Lisa Shamchuk)

Way up in the stands are Brenda Bower and her enthusiastic crew of friends from Medicine Hat, AB. They’ve been loudly cheering for their teams, trying to get the rest of the crowd involved in their chants, and even led the arena in singing “Happy Birthday” to Russ Howard in TSN’s commentator booth on Sunday night. Cheering for Teams Saskatchewan and Canada, this large group of ladies has been spotted in all green, including sparkling wigs, gingham pants, and crazy hats, with a healthy dose of red Canada gear as well. They came to see the good curling, and to relive memories of all the times they’ve attended events together. Brenda sums up the fan experience: “There’s not many sports where you get to interact with the people you cheer for. There’s a lot of sportsmanship and class. There’s a lot of nice people in curling.” In the rows underneath the shot clocks, a discussion about the importance of women’s curling broke out. Cathy Craig, down from Edmonton started it off: “It’s the national championship. Compared to any other amateur or professional women’s event in the country, I think this gets the most exposure in terms of crowd and TV coverage. This is as good as it gets!” Also here from Edmonton, Sandra Troughton agreed saying “There’s young women and grandmas playing competitively together. The fact that you can be competitive and on a national stage at any age – it’s great! Think of all the sacrifice and the support they get from their family. It’s an incredible sport. We should support them too.” Sitting nearby was Sue Comstock from Nova Scotia, mother of Blisse and Melanie Comstock who play on Team Nova Scotia. She stressed the importance of holding national competitions: “It brings the whole country together. You meet friends year after year. That sense of nationalism – it makes the country smaller.” Judy Baker, another fan down from Edmonton agreed. One of her favourite parts of coming out to these events is “meeting the other people, even back at the hotel. You talk to people from all over. There’s a provincial rivalry – but it’s a friendly rivalry. We cheer any good shot, even if it’s against our team.” Sue agreed, pointing out “You know the dedication the teams have put in. You support them all.”