Jamie Murphy and his CFB Halifax teammates Jordan Pinder, Mike Bardsley and Donald McDermaid will all get the opportunity to experience their first Tim Hortons Brier from ice level at Saskatoon’s Credit Union Centre in March after capturing the Nova Scotia Molson Men’s Provincial Championship on Sunday, February 12. They downed 2004 Brier champ Mark Dacey and his Mayflower Curling Club team of Tom Sullivan, Andrew Gibson and Travis Colter by a score of 7-5 in the final. The Murphy rink took 2 in the first end and stole 3 more in the second, in a game in which they never trailed. 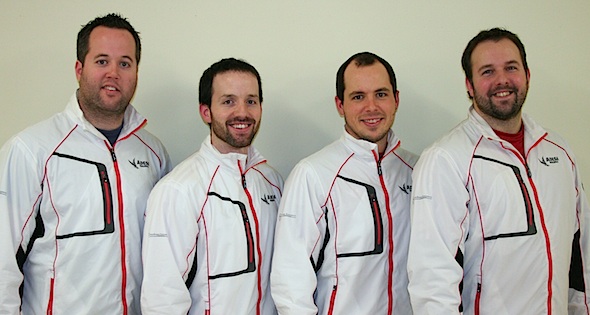 Murphy had earned the free pass to the Sunday finale after having subdued Dacey by a score of 5-3 in the 1 vs 2 Page playoff game on Saturday afternoon. In the 3 vs 4 Page game, Kent Smith and his Mayflower crew of Stuart MacLean, Mark Robar and Phil Crowell took 4 in the seventh and stole 2 in the eighth on the way to an 8-3 win over club mate Ian Fitzner-LeBlanc. Paul Fleming, Robert Doherty and Kelly Mittelstadt supported Fitzner-LeBlanc in finishing tied with Murphy and Dacey with 5-2 records after round-robin play at the Bridgewater Curling Club. With the win, Smith, who finished preliminary play with a record of 4-3, would face Dacey in the Saturday night semi-final game. That Saturday night game did not disappoint the fans in attendance. Dacey built up a 4-2 lead at the fifth end break, but Smith clawed his way back with steals in the seventh and tenth ends to knot things at 6 apiece. With the advantage of last rock, Dacey managed to score the tell-tale single in the eleventh end, for the 7-6 win. Dacey, in pursuit of his seventh Nova Scotia provincial men’s title, went on to face Murphy in the final, while the Smith rink had to settle for their third place finish.