Kevin Koe and his Glencoe Curling Club team of Pat Simmons, Carter Rycroft and Nolan Thiessen are Brier bound after winning the 2012 Boston Pizza Cup, which is emblematic of Alberta men’s curling supremacy. 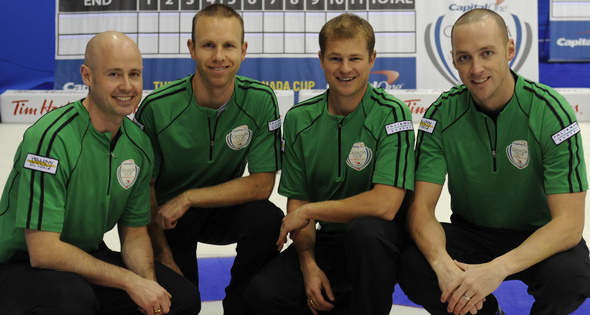 The Koe squad was unstoppable from the outset of play at the Camrose Curling Club, which ran from February 8 -12. In the Sunday afternoon final, Koe never trailed in rolling to a 6-3 victory over Brock Virtue’s Calgary Curling Club team of J.D. Lind, Dominic Daemen and Matthew Ng. With the win, Koe is a step closer to achieving his second Canadian men’s championship in three years when play gets underway at the 2012 Tim Hortons Brier in Saskatoon in March. At the 2010 Halifax Brier, he had Thiessen and Rycroft up front, but Blake MacDonald playing third stones for Team Alberta. After capturing the Canadian title, the foursome went on to win world championship laurels in Cortina d’Ampezzo Italy. Twelve teams started play at this year’s provincial shootout, but when the preliminaries were over, the Page playoffs featured but four teams. Koe and Virtue met in the 1 vs 2 game after qualifying out of A and B flight play respectively, while Rob Schlender and Kevin Martin battled through C flight and faced off in the 3 vs 4 game. Koe cracked a four-count in the second end and never looked back in downing Virtue in an abbreviated 1 vs 2 game by a score of 9-2, while four-time Brier winner Martin needed all ten ends to subdue Schlender and his Saville Sports Center mates Colin Hodgson, Justin Sluchinski and Chris Lemishka by a 5-4 margin in the elimination game. The Sunday morning semi-final game between the upstart Virtue rink and the 2010 Olympic Gold medalists was a dandy. Trailing 7-3 after six ends, Martin and his Saville support squad of John Morris, Marc Kennedy and Ben Hebert fought back scoring a deuce in the seventh and stealing singles in the eighth and ninth ends to tie things at 7 up. The thievery came to an end in the last frame, when Virtue was able to secure the 8-7 win with a score of one. The result of the semi-final game meant that the much-anticipated championship showdown between Martin and Koe would have to wait for another year. The Koe team, coming out of Alberta with Hearts in hand, will surely be one of the favourites in Saskatoon. 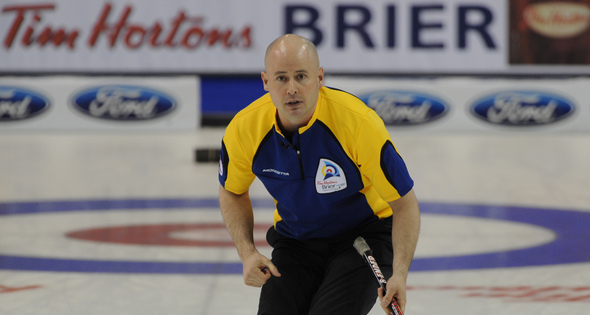