Heather Nedohin’s tour of her home province will continue, after she and her Edmonton, Alberta rink of Beth Iskiw, Jessica Mair and Laine Peters won the 2012 Scotties Tournament of Hearts in Red Deer on Sunday, February 26 with a 7-6 final game win over British Columbia’s Kelly Scott. Next stop for the Canadian champions is Lethbridge and the 2012 Ford World Women’s Curling Championship, being played at that city’s ENMAX Centre from March 17-25. 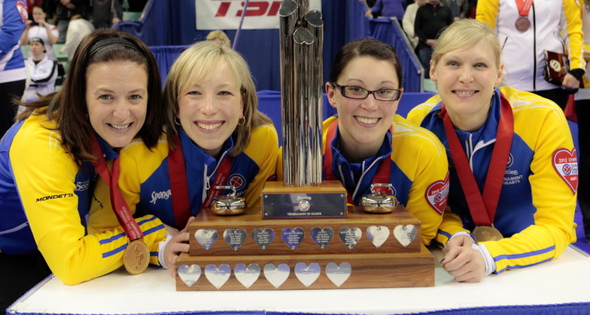 Nedohin and her Saville Sports Centre team fought their way to the championship podium by claiming victories in the 3 vs 4 Page playoff, the semi-final game, and then the final. After finishing the round-robin tied with Quebec’s Marie-France Larouche at 7-4, these two teams squared off in a Saturday afternoon playoff that was up for grabs until the Alberta foursome took 2 in the ninth end and then stole an extra in the tenth for a 7-4 win. The Saturday night semi-final game between Alberta and Manitoba’s Jennifer Jones was a thriller that came down to a measurement after the final rock in the extra end had been thrown by Nedohin. A draw to the four-foot that just kept sliding had the partisan crowd on tenterhooks until the measurement proved Nedohin’s stone the winner by the smallest of fractions. It was a disappointing 6-5 loss for the four-time Canadian champ and her Winnipeg, St. Vital team of Kaitlyn Lawes, Jill Officer and Dawn Askin. The Manitoba team led the way throughout the week, finishing the preliminaries with a record of 9-2, one game better than B.C.’s Scott. In the Page 1 vs 2 game, British Columbia capitalized on a steal of 2 in the fifth end en route to a 7-5 victory. It seemed that Scott, the two-time Canadian champion, and her Kelowna Curling Club support crew of Sasha Carter, Dailene Siverton, Jacquie Armstrong and Sherry Fraser were fighting adversity all week long. A flu bug hit the team hard to the extent that fifth player Fraser was called into action at both the second and vice positions. With the starters rested and ready for the championship game, British Columbia simply got out-curled in the final, giving up a decisive three-count in the sixth end to trail 6-3. They trailed by 2 without the hammer in the last end, and could steal only a single in their defeat. So it will be the second trip to the World Women’s shootout for Heather Nedohin, when she makes the six hour drive from Edmonton to Lethbridge in mid-March. The thirty-six-year-old wore the maple leaf on her back in 1998, earning a bronze medal when she viced for Cathy King in Kamloops.