As the Scotties winds down, it’s almost time for everyone to make the journey back home. Some folks have farther to go than others, but everyone agrees it has been an amazing week! Various scenes played out during the final weekend as volunteers and fans had one last chance to take in and experience the enthusiastic atmosphere the Scotties has brought to Red Deer, before the show moves on down the road. Backstage, behind the scenes, a flurry of activity goes on before each draw. Kevin Watson is the volunteer Director of Ceremonies. Among other tasks such as the opening and closing ceremonies, he organizes and supports about two dozen junior curlers from the Red Deer Curling Centre’s junior program. These young curling fans come from Red Deer and area, and did a great job all week holding the provincial placards while walking out with the teams before each draw commences. Ceremonies volunteer Lisa Wakey has been impressed with the great job and positive attitude of all the junior volunteers, as well as the curlers themselves: “The teams have been amazing to the kids, signing autographs or their t-shirts and talking to them.” Once the event finishes and moves on, this lasting legacy will remain in Red Deer, and we might one day see one of these junior curlers on national ice in the future. 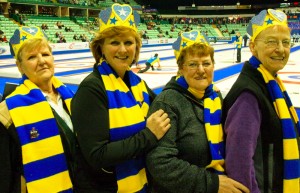 Fan Paulette Desautels, from Prince Rupert, BC, and her sisters Aura Slaght, from Bruderheim, AB, and Elaine Oldale, from Calgary, AB are die hard Alberta fans. Elaine’s daughter Gabrielle Simpson, also from Calgary, AB, has joined them this week to cheer on the home province team. Cheering on Alberta during the Page 3-4 playoff, the ladies were decked out in scarves given to them by Cheryl Bernard’s team at the 2009 Scotties in Victoria, BC, and have also been wearing hats, as Paulette explains: “These are our Power Hats. Alberta won both games the other day when we wore them.” This family keeps coming back to event after event because as Gabrielle explains “The curling has been great. And the people – they’ve just been awesome. It’s a well organized event. Red Deer has been a prefect venue. We have a lot of fun, on and off the ice!” These fans are here till the end, and will be back again soon for another event to support the sport they love. Around the corner from the HeartStop Lounge are the Hall of Fame, sponsor booths and autograph area. Nestled into the corner are the pin trading tables. Larry Nelson, a volunteer from Innisfail, AB, spent his spare time this week displaying and trading his over 5000 pins. His has a small collection; some pin traders have tens of thousands of pins. Multiple pins are created for each event and each curling club will produce pins, but Larry prefers to collect event sponsor pins, of which there are forty five at the Scotties this year. He attends most events in western Canada and enjoys “everything about the event! The pin trading, the entertainment, meeting people and of course watching the curling!” He’ll be heading east to Saskatoon to trade his pins at the Brier as well. 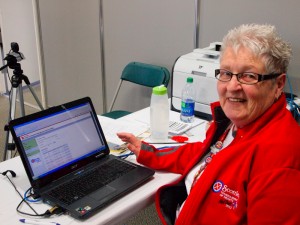 Scotties volunteer Jean Bryski is headed to Saskatoon to volunteer at the Brier too (Photo: Lisa Shamchuk)

Jean Bryski came all the way from Yorkton, Saskatchewan to volunteer for the event. An avid community volunteer, the first event she volunteered for was the Canada Cup in Yorkton in March of 2009. She also volunteered for Edmonton’s Roar of the Rings in December of 2009, and will likely be back in Edmonton for the Brier in 2013. She’s retired, and is happy to volunteer for any event as long as she’s got friends or family to stay with, and a TV to watch to keep up with all the action on the ice. Here at the Scotties, she worked at the accreditation table, making sure volunteers, curlers and other staff have the necessary access to the appropriate areas. It’s a great spot for her, as her favourite part of volunteering is “meeting all the curling fans. You never know who will walk through that door.” She values her time as a volunteer, commenting “The best part is knowing you’re helping. With an event such as this you can’t put it on without a volunteer base. And we get treated so well.” An inspiration to all curling fans and volunteers, Jean said “I’m going to volunteer as long as I can, and I’ll be a fan forever.” She’s true to her word – on her way home to Yorkton she’s stopping by at the Brier in Saskatoon to volunteer as an usher. As the event draws to a close, and fans make their way home in all different directions, drivers will be making multiple trips to the Calgary airport to shuttle home crew, curlers and dedicated CCA staff. It’ll take about three hours to tear down, pack up and load out all the CCA equipment and gear. This all gets packed into an eighteen wheel truck, bound for the Brier in Saskatoon next week, where it’ll all happen again. You gotta be there!