Glenn Howard of Ontario, who has been around for years, had an open hit to win his first game of the 87th Brier on Saturday afternoon at the Credit Union Centre in Saskatoon. With 10,021 fans looking on, three rookie skips joined Howard in the winner’s circle. 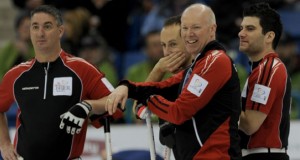 Team Ontario keeps an eye on the ice during Draw 1 at the 2012 Tim Hortons Brier. (Photo: CCA/Michael Burns Photography)

They included Quebec’s Robert Desjardins of Chicoutimi who drew the button in an extra end to upend Manitoba’s Rob Fowler 7-6, Saskatchewan’s unsung Scott Manners of the Battlefords who doubled up 8-4 on Mike Gaudet of Prince Edward Island, and Nova Scotia’s Jamie Murphy of CFB Halifax who cracked a five-ender en route to a 9-5 conquest of Jamie Koe’s Territories team from Yellowknife. Howard survived a tight test against Terry Odishaw of Moncton, winning 6-5 on last stone. Ontario jumped in front by three after two ends but the New Brunswickers battled back to force the issue to the last gasp. A steal of a ninth-end single kept Odishaw in it when Howard rolled too far on a hit for a possible game-ending three count. “But Brent (second Laing) made a beauty double in the 10th and I had an open hit to win it,” said Howard, the 2007 Brier winner. “But, yeah, it was a little nerve-racking at the end. (Continued Below…) “Thing is, we didn’t know we were going the win until my last rock stopped. But it was our first game on the ice, and you’re always unsure and I’m pretty happy. It’s a W.” Howard has Wayne Middaugh, Brent Laing and Craig Savill in support. Desjardins and Fowler waged a classic duel and the Manitoba skip needed to manufacture a deuce in the 10th with last rock to force overtime. Desjardins, also known as Curling-Bob, was looking at two Manitoba counters, one biting the four-foot, when he draw his last rock cold to the button. “It is great, you know?” said the Chicoutimi skip, whose unit includes Jean-Sebastien Roy, Steven Munroe and Steeve Villeneuve. “Eleventh end? Our second game like that in a row? Last game of our provincials I had the same thing — draw to the button in an extra end? And again here, the same thing, draw to the button. It’s fantastic. “I knew I could do it already, but it’s fun. I mean, it was the first-ever complete game for me on TV. I think this shows what Quebec is made of.” httpvh://www.youtube.com/watch?v=RCG2hUcHUzY Manners broke open a scoreless battle in the third end with three, and scored another trio in the fifth for a 6-1 lead. After that, it was a matter of defending for the Saskatchewan outfit. “Today, everybody shot really well and it was a great start to the week,” said the skip who lives in Lloydminster. “We played to win and we’ll take it. I was nervous all day. You get up, go to the weight room, do a workout and get rid of it. I really needed to be level-headed so mission accomplished. It was nice to get out there and start playing and get the nerves settled down.” The Manners team — Tyler Lang, Ryan Deis, Mike Armstrong – had the large crowd applauding every shot. “The crowd was awesome! “ Manners exclaimed. “They’re supporting us 100 per cent. You can’t asked for anything more in the way of support. “Did you guys hear ‘mind your Manners’ out there? I heard that a bunch. It was still exciting, you bet. I’m still trying to keep my feet on the ground. This is exactly what I came to the Brier to experience.” The Bluenosers’ big five set them off to a 6-1 after four ends against the reeling Polars. “They played fairly aggressively that end and a couple of rub-offs and we were able make that work,” said Murphy. “It was pretty intense to be sure. It’s great to get one under our belt, break the ice a little bit. I think it will take the nerves out of it going forward. So, yeah, we’re pretty excited.” On today’s second draw at 6:30 p.m. CT, Nova Scotia returns to take on the Spud Islanders while Manitoba tackles New Brunswick. In other games, Alberta’s Kevin Koe opens against Jim Cotter of British Columbia and Brad Jacobs of Northern Ontario goes against Brad Gushue of Newfoundland/Labrador.