The wins continued to pile up for unsung Nova Scotia at the Tim Hortons Brier on Sunday morning. Jamie Murphy and his rookie team from the CFB Halifax vaulted into a 5-2 lead at the half and defended its way to a 5-3 victory over British Columbia’s Jim Cotter (0-2), thereby extended its win skein to three at the Credit Union Centre in Saskatoon. Skip Murphy hasn’t exhibited any of the faults that might be anticipated to seep through with a Brier newcomer. 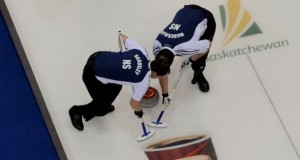 Over a three-game span, his last-rock shooting percentage was an impressive 87. “The crowd’s almost so big it’s easy to stay in your own bubble,” said the unflappable 30-year-old Murphy. “At least that’s how we’re finding it. We don’t know how these teams are going to react but so far we’ve been able to play our game plan. “Everything feels pretty comfortable. We’re executing and we’re playing well within ourselves.” Teams skipped by 2010 champion Kevin Koe of Alberta and Brad Jacobs of Northern Ontario won their second straight on the morning draw. Koe was a 9-4 winner over New Brunswick’s Terry Odishaw (0-3) who wilted in the latter stages, yielding a stolen three in the ninth end, while Jacobs survived his second straight tight-fit, rallying for an 8-7 extra-end verdict against Mike Gaudet’s P.E. Islanders (0-3). Manitoba’s Rob Fowler of Brandon (2-1) posted a 10th-end deuce to nip Bad Gushue of Newfoundland 8-7 in one other thriller. Fowler drew the four-foot to clinch it after Gushue’s last in-turn failed to curl sufficiently. “Any time you have a draw to the four-foot to win the game, it’s something you’re pretty comfortable with,” said Fowler. “The nice thing about my first one (into the four-foot) is it forced him to throw the opposite turn to try to get there. It changed his shot and it worked out pretty good.” The 37-year-old Koe said his Albertans were an improved group. “New Brunswick played really well against us, I thought,” he opined. “It’s tougher playing teams you don’t see a lot of, like those guys. You don’t know what their strengths are. “I mean, is he (Odishaw) a big hitter or a touch guy? Turned out he was a good touch player. It’d be nicer to know that going in but you just have to make do.” Jacobs, of Sault Ste. Marie, was rattled with an opening three-ender by the Islanders but fought back to square it and eventually take control in the 11th end with an open hit to win. “We’ve had to grind out two of them now,” said the Brier’s youngest skip at 26. “That three in the first ticked us all off a little bit. We didn’t want to start off the game like that. But it happens. We were definitely tricked by the ice at the start. But we hung in there, made a nice angle-raise for the deuce to tie up the game (in the sixth end). That picked up the whole team. httpvh://www.youtube.com/watch?v=QhnUY04Ra5w “It’s never a bad thing to get into those kinds of close games early. Knowing we can handle those and win does something for the confidence. “We haven’t been sharp. We have a long way to go as far as improving our play is concerned this week. We have to stay strong mentally and focus on the process.” The young Soo crew is “comfortable with all the distractions now — the crowd, the overall feel of a Brier”. “Having the experience and learning how to handle it is pretty important, I think,” said Jacobs.