Based on the bloodlines alone, Dallan Muyres should enjoy a productive curling career. 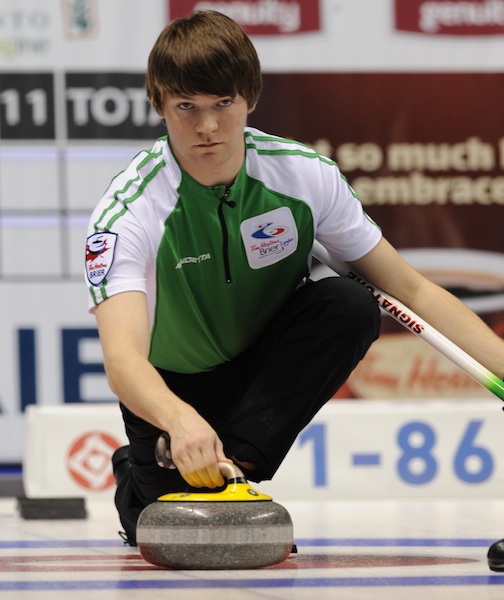 Muyres, the lead for Steve Laycock’s Saskatchewan curling team, is the son of Lyle Muyres, who skipped his three brothers to a Saskatchewan men’s title in 1986 and lost in a tiebreaker at the Brier that year in Kitchener-Waterloo, Ont. Dallan himself has a pair of Saskatchewan jackets already in his young curling career, playing lead for Brennan Jones at the 2008 M&M Meat Shops Canadian Junior Championships in Sault Ste. Marie, Ont.,  and losing out in a tiebreaker, then handling the same lead-rock duties for Laycock at the 2011 Tim Hortons Brier in London, Ont. And there’ll be a family reunion for next season as Muyres is joined by his younger brother Kirk along with Colton Flasch (the newcomers, both members of Braeden Moskowy’s 2011 Canadian junior champs, will play third and second respectively). Away from the competitive scene, Muyres is active on and off the ice. On it, he has worked as an instructor at the Saskatchewan Prairieland Junior Curling Camp for the past four years, and has his Level 1 Technical Coaching Certificate. Off the ice, Muyres does work for the Saskatchewan Research Council, where his duties include trying to create and implement environmentally sustainable energy sources and utilization. Birthplace: Humboldt, Sask. Hometown: St.Gregor, Sask. Curling Club: Moose Jaw CC Current Team: Team Steve Laycock Position: Lead Delivery: Right Nickname: Duk Quick Hits with Dallan Muyres Do you have any superstitions? “I don’t have any superstitions in particular. I do have a sliding shoe that is now out of production, so I am hanging onto this shoe, hoping it holds up forever.” Three people, living or not, whom you would invite to a dinner party. “Great Grandfather Muyres, Einstein, Nikola Tesla.” If you could be a star any other sport, what would it be, and why? “PGA golfer. Similar mental characteristics to curling with much better pay.” If you could change any rule in curling, which one would it be, and why? “Implement think-time as the timing method. This enables a team that is drawing more than hitting not to run out of time.” What music, if any, do you like to listen to before a game? “Volbeat, Johnny Cash, Flogging Molly, Rage Against the Machine, Killswitch Engage. Rock/metal in general.” Favourite: — Website? “Google Financials.” — Order from Tim Hortons? “Plain bagel, toasted with butter and two packages of peanut butter, medium black coffee.” — Vacation destination? “Candle Lake, Sask.” — Junk food? “Old Dutch Kettle Cooked BBQ Chips and cupcakes with icing.” Do you have any pet peeves? “Saskatoon drivers — I am not sure if anyone would be able to still pass their drivers exam!” Person who had the most influence on your curling career. And why? “Current coach and father Lyle Muyres. I watched him curl when I was young and saw the fun and success you can have curling. I asked him to help me get into the sport. He helped me learn to curl and kept me motivated. And the rest, as they say, is history.” First thing on your Bucket List? “Invent a small eco-friendly energy unit that can heat, power, and cool homes.” Favourite pastime between draws at cashspiels? “Eating a good meal, and having a 30-minute nap. Cards are fun; however I typically lose.” Mixed doubles in the Olympics — thumbs up? Thumbs down? And why? “Thumbs up. Any time Canada can have a real good shot at another Olympic medal, that is great. Mixed doubles needs to have a Canadian playdown format. The mixed team should not represent Canada at the mixed doubles as you have to split up the mixed team.” One thing most people don’t know about you? “I can’t stand traveling without my pillow. It takes up about half of my luggage but it’s totally worth it to have a good sleep.” Your ideal shot to win an Olympic gold medal: “Open draw to the eight-foot. Out-turn.” 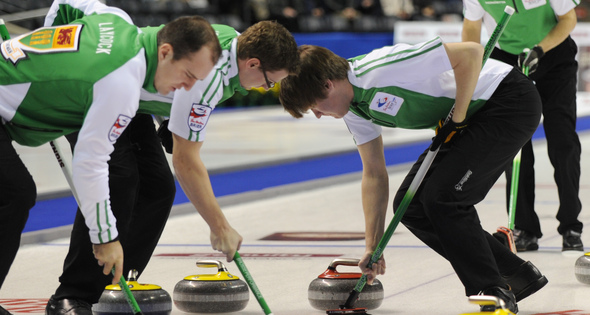