Canada Junior Men came out against a hard-hitting Scottish team, finding themselves on the short end of an 8-4 score in action at the 2012 World Junior Curling Championships in Oestersund, Sweden. Skip Brendan Bottcher, vice Evan Asmussen, second Landon Bucholz and lead Bryce Bucholz were riding a three-game winning streak going into their one game on Monday. 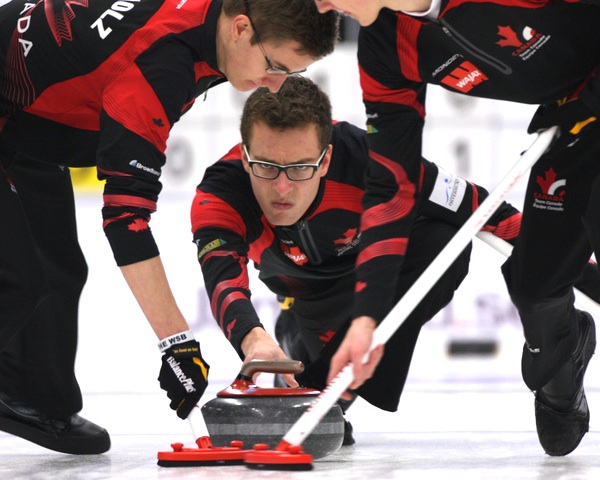 After a wide-open first end in which Scotland blanked, Canada got lots of rocks in play in the second. With three Canadian counters in the four-foot, Scottish skip Kyle Smith made a cool draw for the single. The third end was very similar, only this time it was Canada facing a frozen Scottish counter. Skip Brendan Bottcher drew the tee-line for 1 and a tied game going into three. The fourth end saw almost every stone in play, and when Smith sat in the hack for his final shot, he was facing three Canadian shooters. He elected to hit one of them to cut Canada down to one. In the sixth end, Team Canada ran into trouble after a missed hit allowed Scotland to draw twice around centre. Two run-back attempts fell short. Facing three rocks in the four-foot and only a narrow port to get to the button, Bottcher was a little light, leaving Scotland with a steal of 3. Now trailing 5-2, Canada made a valiant attempt to manufacture a deuce but fell short when Bottcher’s run-back double failed to remove both Scottish counters. Scotland stole one for a 4-point lead. Although Canada was able to get their deuce in the eighth, the ninth end just didn’t set up well. Scotland made a delicate hit for two and that was all they needed. Canada shook hands on their first loss of the tournament. “We didn’t really have a good handle on the ice today,” said Bottcher after the game. “We weren’t too precise with our draw shots. Scotland were great, they made a few misses early on but after that they were making everything.” The loss leaves Canada tied with Norway, Scotland and the United States at 3-1, behind Sweden (4-0) in the Men’s standings. News, live scores, galleries and video highlights can be found on the World Junior Curling Championship website.