Canada sits atop the leaderboard at the 2012 World Junior Curling Championship in Oestersund, Sweden, tied with Russia and Scotland on Day 4 of the Junior Women’s competition. Facing Switzerland in their only game of the day, Team Canada – skip Jocelyn Peterman, with third Brittany Tran, second Rebecca Konschuh and lead Kristine Anderson – stole three points and curled 94% in the first end to apply pressure right from the start. 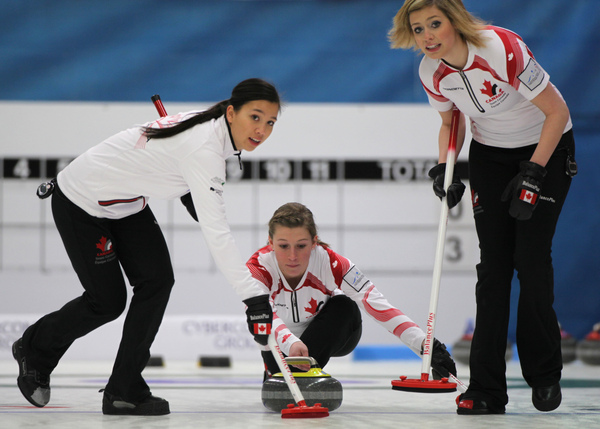 Allowing the Swiss to take a single in the second, Canada poured it on in the third to score a huge 4 points. In the fourth end, a couple of miscues by Canada allowed the Swiss to pick up their deuce. “We were in a bit of trouble [in the fifth end] until third Brittany Tran threw a difficult double on her second rock,” reports National Team Coach Melissa Soligo. Lying 2, with hammer, Peterman tried a complicated hit and flop to try for a multiple score, but just missed. Team Canada took their deuce and increased their lead to 9-3. Keeping it clean in the sixth end, the Canadians were “peeling machines,” says Soligo.  Problems arose when Peterman flashed the peel on her first rock, allowing the Swiss skip, Melanie Barbezat, to draw around. A perfectly placed Canadian rock made it a tough shot for 2, and the Swiss were only able to score 1. In the seventh – and, it turns out, final – end, Nadine Chyz stepped in to replace lead Kristine Anderson, and Canada scored 2 on a perfect draw by Peterman. With the score 11-4 in favour of Team Canada, the Swiss conceded. On Wednesday, Canada faces Russia (5-1) and Japan (3-3. The pressure will be on to maintain the pace, but Peterman sounded confident after today’s game. “It feels good that we’re in control,” she said about the team that has now churned out five wins in a row after dropping their first game of the tournament to the Czech Republic.  “We’ve moved on from that first loss.” News, live scores, galleries and video highlights can be found on the World Junior Curling Championship website.