The whipping winter winds of a Saskatoon Tuesday reminded Brier faithful that it’s a case of Polar pandemonium going on here. Jamie Koe and his Yellowknife crew raised their record to 5-1 and sat tied atop the table with brother Kevin of Alberta who dropped his first tilt of the week to Northern Ontario, and perennial favourite Glenn Howard who set a Brier record this afternoon by playing in his 175th game. 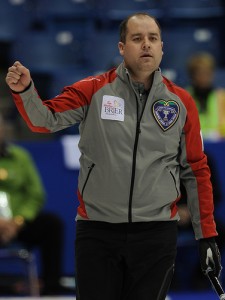 The Polars play P.E.I. tonight, and a win will set up a family feud Wednesday morning that even the most astute rock pundits could not have imagined, in order to decide at least a share of top spot. Jamie Koe needed an extra end to beat Quebec’s Robert Desjardins aka Curling Bob, with a perfect hit and stick in the 11th end for an 8-7 win. “We’ve gotta be happy with the way things have been going,” said Koe. “He (Desjardins) made a couple of pretty good shots in seven and 10 to get his twos, they played well, but I’m also really happy with the way we played today, too.” On a roll, Koe said he is focused on his tilt with P.E.I. tonight, not the match with his big brother on Wednesday morning. Still, he realized that his team’s efforts are the talk of the curling town. “We’re getting a ton of support from all over Canada,” said the Polar skip. “It’s great; we really feed off of it. Everyone’s going nuts from all the social media going on. It’s a lot of fun to interact with the fans. That’s what makes the Brier the Brier.” Brother Kevin, on the other hand, admittedly had his team’s worst effort of the Brier and dropped a 7-6 decision to Northern Ontario’s Brad Jacobs. httpvh://www.youtube.com/watch?v=dtNUvo9thxU Northern Ontario desperately need a win to keep in the pack after starting 2-0, then dropping three straight. Jacobs said it was a good bounce-back. “Feeling pretty good about this last game, but not very happy with the way things have gone this week,” said Jacobs. “We’ve all kind of taken our misses here and there in bad timing situations, but we’re feeling good about that last game so, going forward, it’s just one game at a time.” Still, this early in the week, Jacobs knows it’s important to remain focused. “There’s lots of games left. This is familiar ground for us. We were 3-4 last year going into Wednesday morning. I guess we do need some help, but if they are coming back to us that’s good.” Newfoundland/Labrador’s Brad Gushue put up his second win of the week, one he needed to have to keep any slim hopes alive. It was an 8-6 production over Jim Cotter’s B.C. squad, a team going in on a four-game roll. “I haven’t looked at the scenarios,” said Gushue, but it is only Tuesday, and I imagine 6-5 could still keep us alive for tiebreakers.” Still, his new team is adjusting and hopes for the best the rest of the way after losing 8-1 in the morning draw to Alberta. “We had a good chat after this morning’s game, I didn’t think it was our best effort, or mine particularly. So we just refocused; it would have been real easy to fold the tent, but that’s not our character.” Draw 10 Photos [flickr-gallery mode=”tag” tags=”d102012brier” tag_mode=”all”] And then there was Howard. After 175 Brier contests, you’d think he’d have figured out a way to win games in regulation time, but for the fifth time this week and fourth game in a row his Ontario crew needed one more end to beat Saskatchewan’s Scott Manners 7-5. 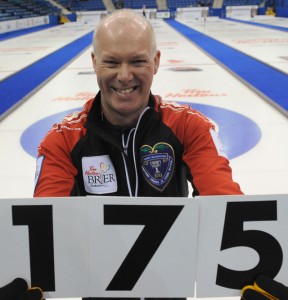 Glenn Howard of Team Ontario holds up "175", the record-breaking number of games played at a Brier. (Photo: CCA/Michael Burns Photography)

“I can’t remember two extra-end games in a Brier period, so that has to be a record,” said Howard. “Guys are playing great against us. I had a couple of brain cramps early there, rolled out, missed a couple of bad draws,” he said. “They (Saskatchewan) are here to win, those guys are a good team; made a ton of shots, obviously they deserve to be here. They’re here to win, not just here to keep it close. Kudos to them.” Manners came out aggressively and kept it close right until the last shot, and despite the loss, was happy with his team’s effort. “A bit of a hiccup there, if I had to have one shot back that’s the one I’d want back. Just a hair hot. It straightened up, that’s curling,” he said of his last brick. Howard said he was just humbled by the historic experience. “I actually didn’t know until I got here (record-wise),” he said. “It’s an awful lot of games. It’s pretty neat to say you’ve played in more Brier games than anyone in history.” And despite a bad run of luck in finals, he understands and keeps his accomplishments in perspective.