Around the House: Always Something to Celebrate

Attention may be focused on championship curling at the moment – the Scotties just finished, the Brier underway, and the Junior World Championships in progress – but clubs across the country have their own special events happening as well. Old and new, big and small, curling clubs love to commemorate their anniversaries and remember where they came from. 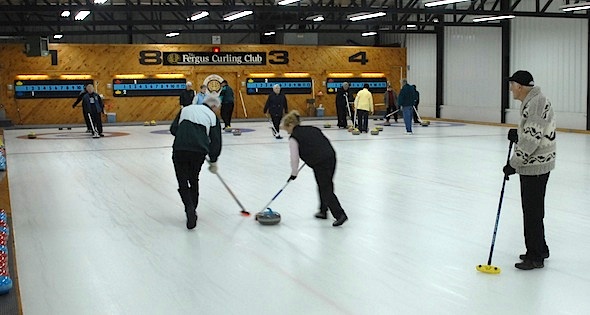 Since 1834 Fergus curlers have been celebrating their club - the oldest continuously operating curling club in Ontario (Photo J. Mills)

A few years ago, the Fergus Curling Club in Fergus, Ontario, celebrated its 175th anniversary as the oldest continuously-operating club in Ontario. Special bonspiels, banquets and a commemorative book of the club’s history made it an event to remember. But sometimes the celebration is cozier. For example, on January 14, members celebrated 50 years of curling in the small, Eastern Ontario town of Lancaster. The Birthday Bonspiel drew 14 teams for games, memories and a “culinary delight”.  According to a report in the local paper, “The meal was a delight to see, so beautifully presented, and tasted so delicious, that the raves were heard across the club.” Food is always important, but people rate very high as well. Three of the club’s original members spoke about their memories of Lancaster CC’s beginnings. And, of course, there was cake! At the Sydney Curling Club in Sydney, Nova Scotia, every year is worth a celebration at the end of the season. The annual Sydney Curling Club Dance and Draw happens in May, but this year it will have an extra sheen as the club celebrates 135 years of curling. A draw, a dance, prizes – and some well-deserved back-patting will take place at the 135th Annual Sydney Curling Club Dance and Draw. In Toronto, it was off to the pub at the start of this season to celebrate the Toronto Curling Club’s 175th anniversary. Wearing vintage red clothing as a shout-out to the legendary “Red Jackets” curling team, members curled a little, ate a lot, and recognized the achievements of their fellow curlers, including wheelchair curler Chris Rees, who received an Honorary OCA Award for his many accomplishments. 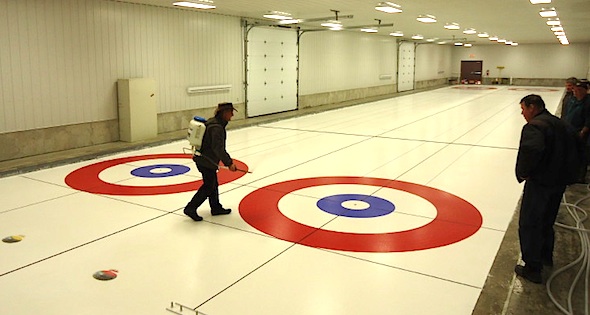 They’re celebrating 60 years at Burns Lake Curling Club in B.C., this month. With a history that includes shifting from two sheets to four sheets to three sheets, rebuilding after a devastating 1968 fire, adding the inevitable improvements and renovations, and benefitting from a constant flow of volunteer and community support, Burns Lake has a lot to celebrate. They’ve been curling at the Vancouver Curling Club since 1912 – although not in the same rink. Thanks to the legacy of the 2010 Winter Olympics, VCC members now take to the ice in the same venue that saw Kevin Martin, John Morris, Marc Kennedy and Ben Hebert win gold for Canada. Centennial celebrations for the VCC’s more than 1000 members will take place this year. Every curling club has something to celebrate. You may be part of a long history of curling that started in 1834 – that’s the case for curlers at the Fergus Curling Club. Or you may be celebrating your successful first season, as they are at the Club de Curling Valleé de la Gatineau/Gatineau Valley Curling Club in Maniwaki. You might be an old club in a new facility, or might be making do with one-night-a-week curling in a hockey arena. As long as there’s action on the curling ice, and people to remember where your club started, there is always something to celebrate.