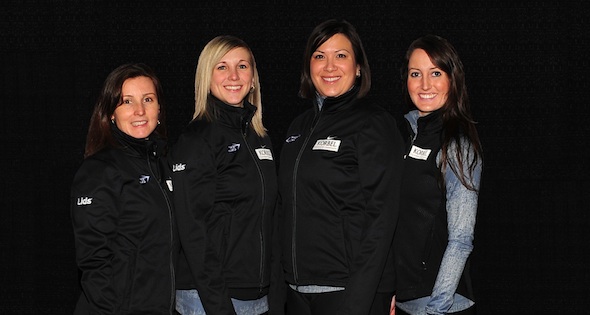 Allison Pottinger and her St. Paul, Minnesota rink of Nicole Joraanstad, Natalie Nicholson and Tabitha Peterson won the title with a 7-5 victory over club mate Cassie Potter in the championship final. Potter, who had the support of vice Jamie Haskell, second Jackie Lemke and lead Steph Sambor, entered the last end of play trailing 6-5 and was unsuccessful in prolonging the game, despite her best efforts for the steal. The championship game was a rematch of the 1 vs 2 Page playoff, which Pottinger won 6-4 by stealing a deuce in an extra end. With the win, the Pottinger foursome earned a bye to the final, while Potter was forced to play Duluth’s Aileen Sormunen in the semi-final. In that high-scoring shootout, Potter rode steals of 3 in both the fourth and fifth ends, to an 11-9 triumph. The Sormunen team of Courtney George, Amanda McLean and Miranda Solem, had previously sidelined Wayzata, Minnesota’s Alexandra Carlson in the 3 vs 4 game by a score of 10 -2. This was the sixteenth national championship appearance for the thirty-eight-year-old Pottinger, who works as a marketing research analyst when she’s not curling competitively. Counting her 1995 appearance as fifth player for Lisa Schoenberg’s U.S. championship team, this will mark Pottinger’s tenth appearance on the world stage. She played lead for Schoenberg in 1996, second for Patti Lank in 1999 and 2002, and then viced for McCormick five times throughout the first decade of the 21st century. Joraanstad and Nicholson are both seasoned veterans when it comes to women’s world championship play, while Peterson will be making her debut at the 2012 Ford World Women’s Curling Championship, which will be contested at the ENMAX Centre in Lethbridge, Alberta from March 17 -25.