She’s 27 years young, she’s been curling for more than half her life and she’s represented Italy on the World stage over 20 times. She’s Diana Gaspari, and she will be making her eighth trip to the women’s worlds when she and her team of Giorgia Appolonio, Chiara Olivieri and Claudia Alvera head to Lethbridge in March. Italy utilizes a selection process in determining the makeup of the women’s teams which represent the country in international events. 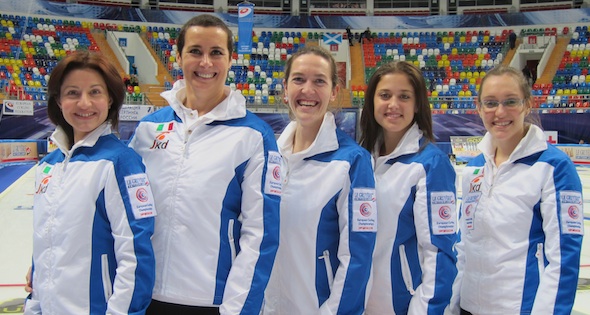 Gaspari, who took up the game in 1996 only after a broken leg curtailed her skiing aspirations, has worn Italian colours at four World Junior Championships, nine European’s and the 2006 Olympic Games, in conjunction with her experience in world women’s play. Gaspari is working toward her PhD in Economics at the University of Innsbruck, Austria, but drives home every weekend in order to practice with the team in Cortina d’Ampezzo. While this is technically a first-year unit, all of the women involved have curled with various permutations of the team and have known each other for years. To say that they are familiar might be a bit of an understatement in terms of the relationship shared by two of the team’s members. Claudia Alvera, the lead on the team, is the mother to the twenty-four year old vice, Giorgia Appolino. Giorgia’s younger sister, Federica is the skip of the Italian junior women’s team which is set to compete in the World Junior’s in Sweden in early March. Gaspari’s best mark at the World Women’s Curling Championship was in 2006, when her team finished with a 4-7 record. The nation’s best finish in women’s world play was way back in 1980 when Maria-Grazzia Constantini tallied five wins and four losses in Perth, Scotland. Gaspari will be hoping for better results when this year’s version of Team Italy makes its way to Lethbridge, Alberta, for the 2012 Ford World Women’s Curling Championship, which runs from March 17-25 at the ENMAX Centre.