Members of the Canadian Curling Reporters (CCR) selected the first and second all-star teams for the 2012 Tim Hortons Brier. The teams were announced and presented with their awards at the Brier Closing Lunch by CCR First Vice-President Paul Wiecek of the Winnipeg Free Press and Laura Lochanski, Chair, Board of Governors, Canadian Curling Association (CCA). 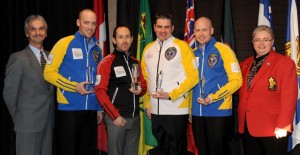 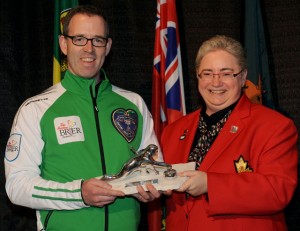 Ross Harstone Award The Ross Harstone Trophy is presented each year to the player chosen by his peers as the curler in the Tim Hortons Brier who best represents Ross G.L. Harstone’s high ideals of good sportsmanship, observance of the rules, exemplary conduct and curling ability. Laura Lochanski, Chair, Board of Governors, CCA, presented the Ross Harstone Award to Saskatchewan skip Scott Manners. Scotty Harper Award – Media Award ($500) For the best curling story of 2011, as selected by the School of Journalism and Communication, Carleton University in Ottawa, the Award is in memory of the late Scotty Harper of the Winnipeg Free Press. 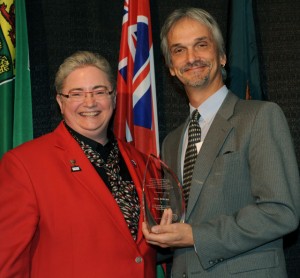 The award had not been presented for a number of years but with the help of the CCA, the award was re-introduced in 2005 and won by Paul Wiecek of the Winnipeg Free Press. In 2006, the winner was Allen Cameron of the Calgary Herald. In 2007 and 2008, SWEEP Magazine’s Jim Henderson won the Award, while Guy Scholz of SWEEP Magazine, was presented with the Award in 2009 while Bob Weeks of the Globe&Mail was the recipient in 2010. Last year’s winner, for the third time, was Jim Henderson of SWEEP Magazine. This year’s winner is Paul Wiecek of the Winnipeg Free Press, for his story entitled “Toba’s fairytale story slipping away.” Paul McLean Award (named in honour of the highly-respected TSN Producer/Executive Producer of curling, CFL football and World Juniors Hockey, who died of cancer at the age of 39 in December of 2005) 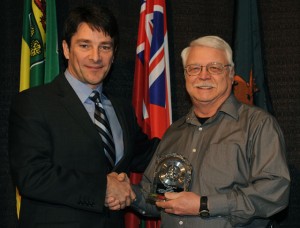 The Award was presented for the first time in 2007 by the CCR and TSN to a media person ‘behind the scenes’ who has made a significant contribution to the sport of curling. The inaugural recipient was Richard Wells, TSN Director (Hockey, Baseball and Curling). The 2008 winner was Denis Lavoie, Associate Director for CBC-TV Sports, while Jeff Timson, Coordinator, Media, Canadian Curling Association, was the recipient in 2009. In 2010, Robin Wilson, former Kruger Event Manager and current CCA Media Coordinator for the Scotties Tournament of Hearts, received the Award. Last year, the award went to long-time CCA photographer Michael Burns Jr. This year, the Paul McLean Award goes to Len Dubyts, a native of Winnipeg, who has been the long-time overhead robotic camera operator for both CBC and TSN. TSN’s Senior Producer, Scott Higgins, made the presentation to Dubyts.