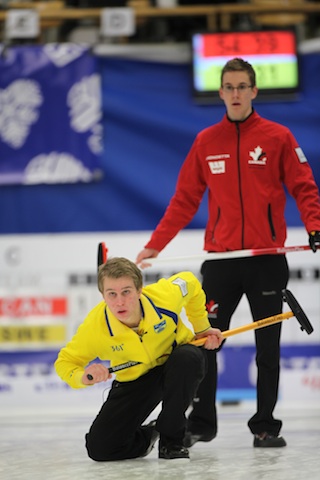 Canada controlled the game from start to finish. A score of 5 in the seventh end sealed the victory against Rasmus Wranå and his Swedish team – the third time in the competition that the two teams had faced each other. In the first end, Bottcher faced two Swedish counters on his last shot and elected to hit for a single. “The Swedish skip showed his prowess at hitting,” says National Team Coach Scott Arnold about the second end. “He made a double through a port on his first, and hit and stayed on his second while facing two Canadian rocks in the four foot.” An unfortunate pick on the Wranå’s first shot of the third end allowed Canada to draw to lie three. Unfazed, the young Swedish skip made a double to cut Canada down. Bottcher drew the button with his last for a 3-1 lead. “Canada dominated the fourth,” says Arnold. “Facing three Canadian counters, all behind cover, the Swedish skip proved why he is in the final and drew full four for his single.” With a lot of rocks in play in the fifth, Bottcher made a short raise takeout and rolled to score his two. Now trailing 5-2, Sweden tried to generate some offence, but a missed draw by Swedish third Jordan Wåhlin allowed Canada to apply some pressure. After a perfect freeze by Bottcher, Sweden was forced to a single and continued to trail, now by a 5-3 score after six. “This game finished the same way as the Page 1-2 game,” reports Arnold. “Canada completely ruled the house and after Bottcher made a run-back for 5, the Swedes decided that was enough.” For Brendan Bottcher, third Evan Asmussen, second Landon Bucholz and lead Bryce Bucholz, the gold medal comes after a week of dominating play in the round-robin. They finished on top of the leaderboard (8-1), losing only one game (to Scotland) and carried that winning momentum in to the playoffs. “It feels just amazing to be world champion,” said Bottcher after the final.  “We’ve been curling all our lives to have a chance at something like this, and it’s amazing to have gotten here and to win it.  We were ahead on the scoreboard and then in the seventh end we got it done, so that was good.  My team set up the seventh end great.  He didn’t have a whole lot and he was just a hair heavy on his last one and left me a shot, and I was fortunate enough to make it.” With the victory, the team from Edmonton’s Saville Sports Centre earns Canada its 18th world junior men’s title since 1975. The most recent gold medal was won by another Alberta team, skipped by Charley Thomas, at the 2007 championship held in Eveleth, Minnesota. 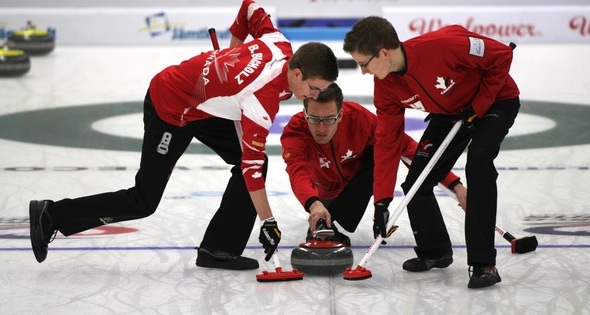