The Case for Mixed Doubles Curling

There are three things you need to know about mixed doubles curling. First, and it galls me to say this, Canadians aren’t very good at it.  Four cracks at (but, it should be noted, just three actual trips to — I’ll explain later) the world championship have produced only one bronze medal, thanks to the duo of Sean Grassie and Alli Nimik in 2009 at Cortina d’Ampezzo, Italy. 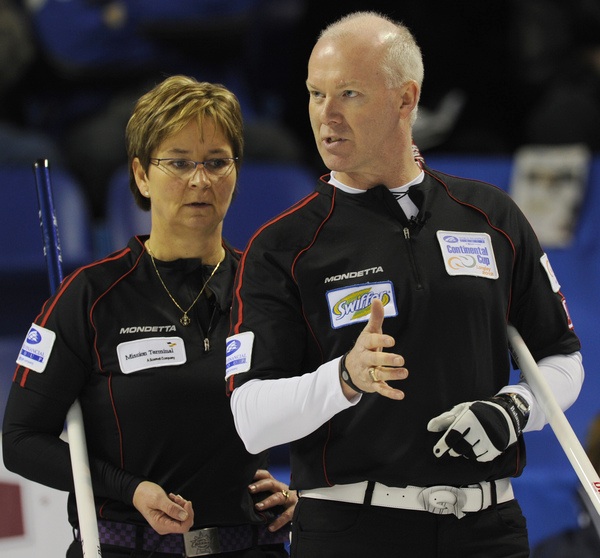 Hungary has a better record at the worlds than we do. So does New Zealand. So does Finland. Yikes. Secondly, most of Canada’s top curlers don’t seem to care about mixed doubles. They consider it a gimmick, something to try out at the Continental Cup for a few laughs, but then to be immediately discarded as a novelty, along the lines of a Christmas draw-to-the-button turkey shoot. And here’s the third thing — that attitude has to change, quickly. Like it or not, mixed doubles is here to stay, and it’s going to be an Olympic discipline, possibly as soon as the 2018 Winter Olympics in South Korea. We’re falling behind the rest of the world in mixed doubles, both in terms of on-ice execution and strategy. And if that doesn’t change, we’re going to be embarrassed in a big way when (not if) it makes its Olympic debut. “I think it’s looking positive, providing we can fulfill the criteria expected by the International Olympic Committee,” said World Curling Federation president Kate Caithness earlier this year, after a WCF committee was struck to get the ball rolling on making a formal bid to the IOC in 2014. “We’re working toward making it happen, but there’s a lot of work to do before then.” And while Canada has been a leader in the past in growing the sport (the traditional version, that is) worldwide, we’ve suffered badly on the mixed doubles front, and the rest of the world has been carrying the load. Many European countries have established national mixed doubles championships, and mixed doubles bonspiels are an increasingly popular social event. But outside of the Continental Cup, it’s non-existent in the biggest curling country on the planet in terms of participation, and that doesn’t necessarily sit well with Canadian Curling Association CEO Greg Stremlaw. 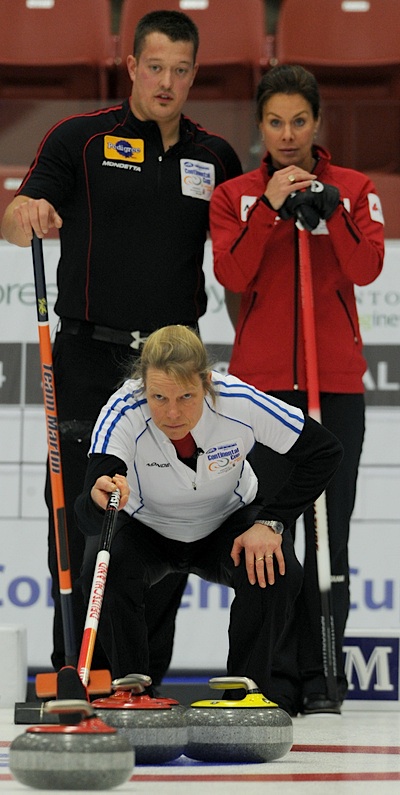 “Any time there’s an opportunity for another Olympic medal, especially in the sport we love so much, I personally don’t see that as a bad thing,” he said earlier this year. “But I think there’s more work to be done. We want to see if this has a legitimate chance, and if it does, as the world’s largest curling nation, I would think we would want to embrace it wholeheartedly.” And that means getting the country’s best players on board with it, and that will be a challenge. For every top player who enjoys playing it — John Morris, for instance, has been particularly vocal in his support — there are a dozen who look down their nose at it. “I don’t know,” said Winnipeg’s Mike McEwen, the Canadian Team Ranking System men’s leader this season. “Personally, to me it’s kind of a little gimmicky. I tried it once and didn’t really think it was a good representation of the sport. If they go that route, I’d like to see a little tweaking. I think it’s silly having five rocks per end; I think it should be more traditional. Maybe seven rocks per end with the guard in place. It seems like they shortened the ends down too much.” “I don’t hate it, but I definitely don’t love it,” added 2010 Olympic silver-medalist Susan O’Connor of Calgary, the highest-profile Canadian to have played in the world mixed doubles, in 2008 with Dean Ross; that duo finished fifth in the inaugural world championship. “Do I think it belongs in the Olympics? That’s not for me to say. But it’s just not curling in the traditional way. As Canadians, curling is so ingrained in what it is, and the team aspect of it. I can see it being good for smaller countries where they might be able to field a full team of four women or four men. But for me? I’m not a huge fan.” They’re hardly atypical with those misgivings. But here’s the thing — curling has always been a sport of evolution. Think back to the negative comments that accompanied the introduction of a 10-end game at the Brier instead of the traditional 12-end tussle. Or push brooms. Or the time clock. Or the free-guard zone. And all of those are now a fact of life and embraced. Granted, mixed doubles is more of a leap — it’s an entirely different way to curl. Two rocks are placed in set positions at the beginning of an end, before each team delivers five rocks apiece, with one player on a team throwing the first and last stone, and the other delivering the middle three, with the throwers also able to get up after their slides and sweep. “Not having (two full-time) sweepers is the biggest difference,” said O’Connor. “It’s very lonely out there. When you’re in the hack, you don’t look up (at your sweepers) and go, ‘What do you guys think?’ It’s very solo. It’s not curling to me. “In your head, there’s no thinking like, ‘OK, I can throw it top-eight and the sweepers can take it to the button.’ You have to throw it to make it.” But it’s hardly the only difference; early rock placement is so much more crucial in the shortened ends, and a miss for the team without hammer almost guarantees a multiple score for the opponent. And the strategic elements of what player should throw when (should the female throw first and last, which often can be draw shots? Or should the male, if a big-weight bailout shot is needed at the end) are still evolving, particular for Canadians. But what’s needed most for Canadians to succeed in mixed doubles is an attitude adjustment for the country’s best players. “It’s just because it’s different, it’s new,” said long-time Canadian national coach Jim Waite, who’ll be the team leader for the Canadian entry at the 2012 world mixed doubles championship in April in Turkey (Canada’s team will be decided in a playoff in Regina, where the husband-wife duo of Jason and Colleen Ackerman will play a playoff series against Chantelle Eberle and Dean Hicke, after that foursome won the Canadian mixed title in Sudbury, Ont. on Nov. 19 – Eberle & Hicke won that competition and will represent Canada in Turkey this April). “But a lot of the people who’ve played it at the Continental Cup love it. And in Europe, it’s huge; there are bonspiels all over the place. And I’ll tell you, Canada won’t do well at it until we take it seriously and put two of our top athletes in there. We’ve had no success there; we were 12th last year in 21 teams. 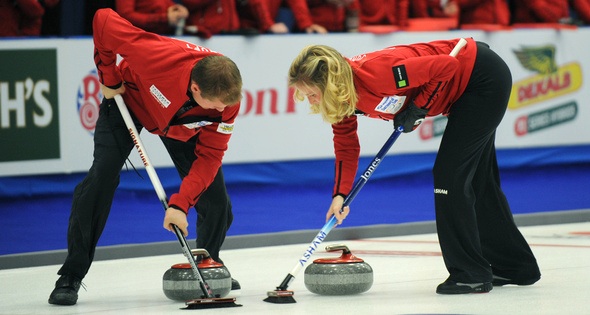 Part of the reason Canada struggles at the world level is the lack of a domestic championship. Currently, we send two players from our national mixed championship winner, and, quite frankly, most top players these days don’t bother with mixed curling any more, so that waters down the talent pool. There is, however, a move afoot to establish a Canadian championship, and provide some incentive (such as a schedule-friendly date) for top players to give it a whirl. And, to be fair, Canada had a world-class entry set to compete in the 2010 world championship in Chelyabinsk, Russia, when former Brier champ Mark Dacey and his wife Heather were to compete, but were stranded in England because of the Iceland volcano that disrupted air travel. But in the end, it still comes down to attitude, and Canada’s top players are going to need to change theirs when it comes to mixed doubles, and getting into the Olympics will definitely help. “Hey, any way to expand the sport, and if you could ever make it another medal sport, that would be good,” said 2010 world champ Kevin Koe of Calgary. “But I don’t have a clue how the top curlers would be able to play it; they’re busy enough as it is. You’d have to make a choice (between team curling and mixed doubles); I don’t think you’d be able to do both. But, hey I’m all for it.” “I think any exposure that curling has to the world is a good thing, so I would be in favour of it being there,” added 2010 Olympic gold-medalist Marc Kennedy. “But on the same note, it’s not the same as curling. It’s missing a lot of the essentials that make curling such a great sport. The communication, the sweeping — I find it really quiet. I don’t know, it’s just . . . different. “But when it comes to the wider audience that curling would have? I think that would be great. And who wouldn’t be on board if it were in the Olympics? I’d do the shot put if it could get me to the Olympics.”