Pebbles to Boulders: From Little Rocks To Scotties

Imagine, growing up in a curling family, where your life-long dream is to play in the Scotties Tournament of Hearts Canadian Womens Curling Championships. Since age 5, each winter is spent at the curling club, learning the craft that finally one day sends you and your team to the dream-come-true with a win of the Scotties provincial championship. This is exactly what has happened to Tracy Horgan from Sudbury Ontario. Tracy and her older sister Jennifer were signed up with the Little Rocks program at the Idylwylde Golf and Country Club by her father Gerry. The program at the Idylwylde started in 1990, where since then, between 15 to 45 youngsters get their start with curling each year. 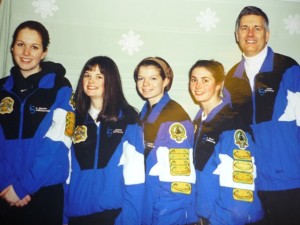 “The Idylwylde have great coaching, fun drills and instruction and awesome bonspiels,” recalls Tracy. “I remember throwing the little red and blue coloured rocks. They did not curl much, but it sure was fun. I moved up to regular rocks when I was 8 years old.” Since that first year, Tracy and Jennifer have curled together, and their father has coached his girls for 10 years. Before earning the right to represent Ontario at the national Scotties, success has been marked on Tracy’s curling calendar. Her teams have won three Northern Ontario Bantam titles and played in the Ontario Trials for the Canada Winter Games. She won the All-Ontario Bantam Mixed with her sister, Mike Jakubo (2 time Brier rep from Northern Ontario) and Sandy MacEwan. Three times she went to the Canadian Juniors finishing with a record of no less than fourth place. One year, she was voted the All-Star Skip. For those who have had the pleasure of meetingTracy, you notice she is not a very large person. “At my first Bantam provincial when I was 11, I had to stand on some books for the group photo,’ laughs Horgan. “Once in juniors, the team hid me from the coach in the broom bag.” 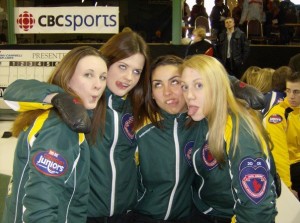 Tracy has also played in two university nationals representing Laurentian University: in 2007, finishing 4th and in 2008, placing 3rd. One trip to the Mixed nationals was made in 2010 with Jordan Chandler, Clint Cudmore and Lindsay Miners. In Scotties competition, Tracy has made five trips to the provincials. In 2010, her team was runner-up; in 2011 they placed 3rd; and in 2012, they won the championship. “This year at the Ontario Scotties in the final, we were down 5 to 2 after 5 ends, playing Rachel Homan from Ottawa. One of the volunteers whispers to us, ‘just so you know, you have to play 8 ends’”, giggles Horgan. “She did not mean it in a bad way, we found it really funny. When we started the 10th end, we whispered back ‘look we made it’”. The Horgan team scored two in the tenth end for a 7 to 6 win and a trip the Scotties Nationals. Tracy’s curling has had some other memories along the way. During a club league game, she lost to her little brothers when they were 10 and 12 years old; the game never went to 8 ends. At the 2006 Junior Nationals, her team was the only team of girls to become snowed-in at the end of the week with 13 boys teams; they all went bowling and had a blast. 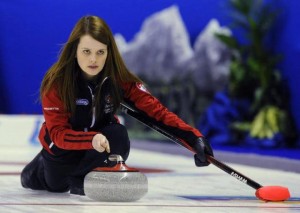 “In our 2005 Junior Provincial final, I missed an open hit for the win in the 10th end, which forced an extra end,” recalls Tracy. “In the extra, I had to draw the button for the win and go to our first national championship.” In the Red Deer at the 2012 Scotties Tournament of Hearts, the Horgan team from Sudbury – Tracy Horgan, her sister Jennifer, Jenna Enge and Amanda Gates – finished with a 4 and 7 record. “We are looking forward to improving that record next season, as our team is sticking together in hope to make it back to the Scotties.” If you know of a Little Rock curling program or a special Little Rocker that has a story to be told, I would be thrilled to hear from you. Contact me at email, [email protected].