Germany moved alongside the Czech Republic as two-game winners at the Ford World Women’s Curling Championship at the Enmax Centre in Lethbridge on Sunday morning. The makeshift team skipped by New Brunswick-born Melanie Robillard with Imogen Lehmann throwing the last rocks persevered for a 7-6 extra-end victory over Scotland’s Eve Muirhead, the four-time world junior champion. 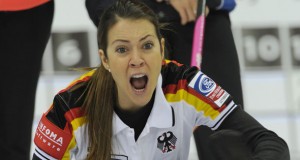 In one other game, Denmark’s Lene Nielsen squared her record at 1-1 by defeating Anna Sidorova of Russia 7-5. It was Russia’s second straight defeat. Germany stole in front 2-0 in the fourth end against Scotland and then fended off the favoured Muirhead crew over the remainder. Scotland recorded deuces three times to square the account but Lehmann executed a cold, in-turn come-around draw to the four-foot in overtime to seal the decision.(Continued Below…) Draw 3 Photos [flickr-gallery mode=”tag” tags=”d32012fwwcc” tag_mode=”all”] “There is no secret,” said Robillard afterward. “We had pretty good control of it all game and it was pretty steady. Imogen played amazing, she had good draw weight and she could bail us out when we needed it. “I was pretty confident on the last draw. She’d had pretty good draw weight all game. And she’s a pretty calm person.” Robillard and Lehmann now have combined for two world-class games together. Lehmann was Robillard’s replacement following the Germans’ 2010 world championship with veteran Andrea Schoepp skipping. And the latter veteran was scheduled to skip the team this week until breaking her leg in a ski accident a week ago. Robillard was quickly conscripted as a replacement but never has skipped previously. “I’m sure she’s really proud,” Robillard said of Schoepp. “I’ve talked to her. It’s new for me, learning how the girls release it and throw, so I’m having chats with her on a daily basis to see how she can help me. I’m still really new at this.” Robillard said she’d spoken to Lehmann twice prior to the trip to Lethbridge. “She’s a really calm person and that helps because I’m a bit more on the hyper side,” said Robillard. “She calms me down and it works really well.” Muirhead termed it “one of those games that could have gone either way at the end”. “We gave them a couple of cheap twos but we were able to generate them back,” she said. “In the end, we had our chances in the extra end but she played a cold draw to the four-foot. We left her with a tough shot and she made it perfectly and deserved to win. (Continued below…) httpvh://www.youtube.com/watch?v=5IBs8HwYVjQ “We just have to forget about that, and put it behind us because we’ve got more tough games ahead. You can’t win them all and I think they (Germany) have done great without Andrea so far.” Denmark stole a vital point against the Russians in the fifth end for a 4-2 edge and cruised from there. “It was important to us to try to play better than in our first game, which was a bad game,” said Nielsen, whose team bowed 6-3 to Germany in its opener on Saturday. “We wanted to get a feel for the draw weight and I think the girls did a good job. We still have to make some changes in our technique but I think we’re getting better.” Expectations for the Danes are high based on last year’s rookie performance (fourth place) in front of the home fans at Esbjerg. “I know, I know,” she said. “They’re expecting big things back home as well so it’s a kind of pressure, but we’re still new on the world stage and we’ll keep learning and it’s a great experience being here.” Draw Four matches at 2:30 p.m. MT: Sweden (1-1) vs. Czech Republic (2-0), Canada (1-0) vs. China (0-1), Switzerland (1-0) vs. U.S.A. (0-1), Italy (0-2) vs. Korea (1-1).