Canada steals its way to the top

It’s Oh Canada . . . already! Five draws into the 2012 Ford World Women’s Curling Championship and Heather Nedohin’s Canucks already are out front in the global pack at the Enmax Centre with the only unbeaten record in the tournament. Canada’s team won its third straight Sunday night when Swiss skip Mirjam Ott overthrew a last-rock tap on a Nedohin stone half-hidden behind a centre guard which left Canada with a 6-5 win. The Swiss stone nicked the target and rolled on through the rings while the Canadian rock wasn’t erased from the scoring area. 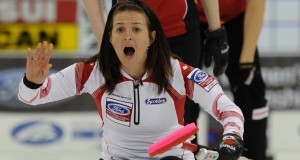