Losing the final at the Manitoba men’s championship to Rob Fowler was a crushing disappointment for Denni Neufeld and his teammates with the Mike McEwen squad from Winnipeg. 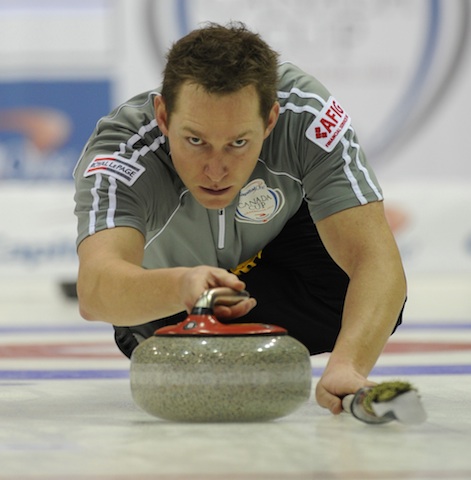 But based on the talent and dedication of the McEwen team, which features Neufeld at lead, Matt Wozniak at second, Neufeld’s kid brother B.J. at third and their dad Chris as the coach, it’s but a temporary roadblock for one of the best young teams in the world, leading both the World Curling Tour money list and the Canadian Team Ranking System standings, pending Glenn Howard’s results at the world men’s championship in Basel, Switzerland. Denni Neufeld has been enjoying success on the pebbled ice for a long time, dating back to his first major victory as a skip, at the 1999 Canada Winter Games. Two years later, he threw third rocks for McEwen’s Manitoba junior championship team that went on to finish second to Brad Gushue at the Canadian junior championships in St. Catharines. And two years after that, the McEwen team would claim a gold medal at the 2003 Universiade in Tarvisio, Italy, representing Brandon University. Neufeld also skipped a team to the Manitoba mixed final. Since the current incarnation of Team McEwen was formed, Neufeld has become one of the best leads in the country, earning three all-star nominations at the Manitoba championship, and helping the McEwen team win 12 WCT events, including three Grand Slam titles. Neufeld’s golf game doesn’t have quite as many accomplishments, although he does have a hole-in-one on his resume, way back when he was 15 when he took one swing on the 7th hole at Sandy Hook to hole out a 176-yard 4-iron. Birthplace: Steinbach, Man. Hometown: Winnipeg Curling Club: Fort Rouge C.C. Current Team: Team Mike McEwen Position: Lead Delivery: Right Nickname: None Quick Hits with Dennis Neufeld Do you have any superstitions? “The only superstition I have is that on Sundays/Mondays of ’spiels, I wear my red underwear. So far this year they are boasting a 19-6 record. Not bad!” Three people, living or not, whom you would invite to a dinner party. “I would invite Tiger Woods because even though he has done a lot of wrong things in life, he has done a lot of good things on the golf course and I would like to pick his brain about that part of him. Donald Trump would be another person I would invite to dinner to learn more about his business and marketing mind. The third person I would invite is my Grandpa Penner because he passed away when I was very young and I never really got to meet him.” If you could be a star any other sport, what would it be, and why? “I would want to be a pro golfer on the PGA Tour, for sure. I love the game and wish I was better at it.” If you could change any rule in curling, which one would it be, and why? “The rule that if one player on the team threw three rocks accidentally, the third rock thrown would be considered a burnt rock and come off rather than being no penalty at all other than the player after only gets to throw one.” What music, if any, do you like to listen to before a game? “I don’t really listen to music before games, but when I do listen to music there isn’t much I don’t like. I listen to a lot of hip hop, rock and dance music when I’m working out. I enjoy listening to a little Sinatra or even some country now and then.” Favourite: — Website? “www.mcewencurling.com” — Order from Tim Hortons? “Now that they have cappuccino, I like a straight cappuccino with no sweetener.” — Vacation destination? “Bora Bora and Tahiti.” — Junk food? “Big Foot Gummies and plain chips.” Do you have any pet peeves? “People who do not know how to merge into traffic.” Person who had the most influence on your curling career. And why? “My father for sure. He taught me the game and how to slide and continues to be our team’s coach today.” First thing on your Bucket List? “Skydiving.” Favourite pastime between draws at cashspiels? “Eating, napping and doing work.” Mixed doubles in the Olympics — thumbs up?  Thumbs down? And why? “I give it a thumbs-up. I think that the more exposure the sport can get the better.” One thing most people don’t know about you? “My two front teeth aren’t real; they’re veneers. I knocked them out on the handle bars of my bike when I was about 10 years old.” Your ideal shot to win an Olympic gold medal: “Definitely a draw to the button. Since I play lead I would love to have to sweep a draw and put it right on the pin hole to win Olympic gold.” 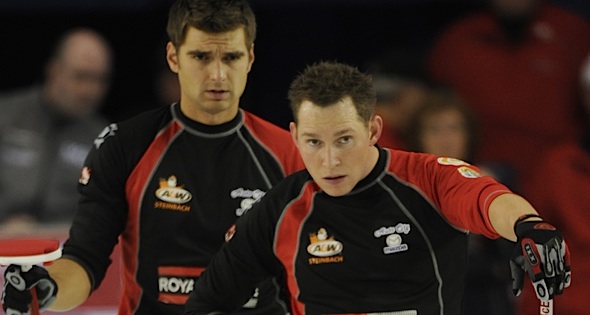