Suddenly, it’s a traffic jam. Canada’s Heather Nedohin of Edmonton skipped her team to an 7-5 conquest of leading Korea on Wednesday morning, thereby pulling the upstart Koreans back into a leading four-pack of teams with 6-and-2 records. 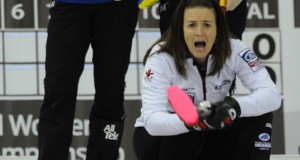 The Canadians delivered an immaculate performance capped by skip Nedohin’s 89-per-cent shooting effort in handing the astonishing Koreans their second setback of the piece. Canada fashioned three deuces, overcame a 3-2 disadvantage after three ends and turned up the juice to limit its foe to a pair singles with last rock over the remainder. “That wasn’t necessarily our best game yet,” said Nedohin, “but we knew we were playing the first-place team and most of the time when we needed a shot, it was made. “And there’s nothing like having the core unit back together,” she added, referring to her team welcoming flu-ridden second player Jessica Mair back to the lineup. “It’s nice to have an alternate like Amy (Nixon) ready to go but it takes years to establish your routines and your unity and everything and it just felt really good out there this morning.” Korean skip Ji-Sun Kim was facing difficult situations in most of the latter ends after scoring three in the third. She kept her team in it with a precise takeout shot looking at five enemy stones in the fifth end but never was able to build an offence thereafter. So it’s Canada and Korea, Sweden and Switzerland, with the hard-charging Americans and four other squads situated two games off the pace with five draws to go in round-robin play. Sweden kept pace with a 7-5 win over China’s Bingyu Wang, mainly on the strength of a five-count in the first end and a solid defensive display for most of the remainder. And Switzerland’s Mirjam Ott doubled up on Italy 8-4 with deuces in the eighth and ninth ends. Allison Pottinger’s St. Paul, Minn., unit won its fourth straight after four opening losses, defeating Linda Klimova’s fading Czechs 6-4. “We didn’t mix it up a lot,” said Pottinger, who drew the four-foot to solidify her victory in the 10th end. “We had a good solid game. I think we have stopped worrying about everybody else, decided this is how we play our game, we’ve got the broom figured out a little better and we’re just a little more staying within ourselves. “We work really hard on focusing on process. All that matters now is the first end of the next game. We can’t afford to get ahead of ourselves. It’s always too soon for that.” (Continued below…) httpvh://www.youtube.com/watch?v=CpfPzBxVc7I Swedish skip Sigfridsson, who plays lead rocks, admitted a big first-end lead isn’t always easy to protect. “It seems like a long game after that because you think you should keep the lead all the way through but you are always in danger of giving up points,” she said. “You need to keep on focusing when you give some of those points back. We expected China would play better after the first end. They are really good at playing their game and stealing points.” Ott scored two in second, added back-to-back singles in the fourth and fifth frames for a 4-1 lead, then withstood a tying challenge from Italy’s Diana Gaspari and closed it out at the finish with the deuces. “We curled quite well,” she said. “It was a close game. We had to perform at our best. They made some mistakes at the end of the game and that help us get another win. We were in control but never could score a high end and could not afford any misses to let the back in it.” In afternoon action today, Canada plays Germany (3-4), Switzerland goes against Denmark (3-4), the U.S.A. faces Russia (3-4) and Scotland (3-4) tackles China (2-6).