When two-time Scotties Tournament of Hearts champion Kelly Scott decided her team needed a shakeup prior to the 2009 season, she scoured the British Columbia curling scene looking for a replacement for her long-time lead Renee Simons. 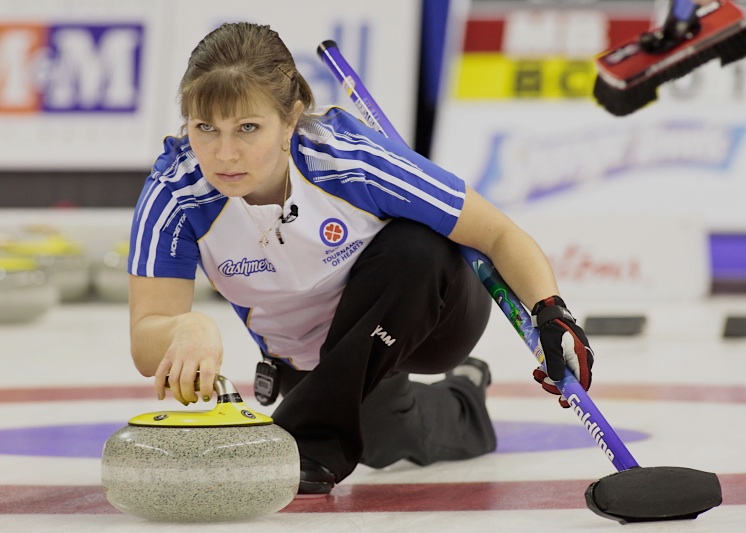 So it’s a tribute to the talent of Jacquie Armstrong that the talent hunt led directly to her. Since joining Team Scott, Armstrong has established herself as one of the most dependable leads in Canada. She was a second-team all-star at the 2010 Scotties Tournament of Hearts in Sault Ste. Marie, Ont., and has helped keep Team Scott among the best women’s foursomes in the nation, as evidenced by Team B.C.’s strong run at the 2012 Scotties in Red Deer, Alta., where Armstrong and her teammates overcame various issues with illness to reach the final before losing to Alberta’s Heather Nedohin. Prior to joining the Scott team, Armstrong had played in five B.C. women’s championships, losing finals in three of them. When she’s not playing for Team Scott, Armstrong does her best to help build the sport. She’s a regular volunteer at her home club’s learn-to-curl clinics, and also helps out with the Little Rocks program. Growing up, Armstrong had a notable high school career on and off the ice. She won a B.C. high school curling championship, and also earned the Governor General’s Medal for excellence in academics (“Yah,” she admits, “I’m a total nerd”). Birthplace: Penticton, B.C. Hometown: Chilliwack, B.C. Curling Club: Kelowna Curling Club Current Team: Team Kelly Scott Position: Lead Delivery: Right Nickname: Jak/Jacs Quick Hits with Jacquie Armstrong Do you have any superstitions? “Superstitions? Nah. Routines that border on obsessive compulsive? Perhaps…” Three people, living or not, whom you would invite to a dinner party. “My Gram B (gone but never forgotten), Jimmy Fallon and Walt Disney.” If you could be a star any other sport, what would it be, and why? “Beach volleyball; I totally have the height for it.” If you could change any rule in curling, which one would it be, and why? “Full contact behind the tee-line; I think Kelly could really do some damage back there!” What music, if any, do you like to listen to before a game? “Our team CD that Kelly puts together each year; but I think my favourite is the one that included ‘Centerfield’ — Put me in, Coach!!” Favourite: — Website? “www.clubpenguin.com (hey, it’s my job and it’s SUPER fun, and safe for kids, and…. OK, OK)!” — Order from Tim Hortons? “Large coffee, regular.” — Vacation destination? “Anywhere hot with an all-inclusive bar, must not have internet access.” — Junk food? “Does gin and tonic count as food?” Do you have any pet peeves? “Several — how much space do I get? Incompetence. Little dogs in unexpected places. People who like to spout uneducated opinions. Oh dear . . . continuing with this list may make me seem like a mean person. I think I’ll stop there!” Person who had the most influence on your curling career. And why? “If I don’t say Brent Pierce here he would likely take issue with that. If you ask him why, I’m sure you’ll get the FULL story. I would also be amiss to not mention the incredible coaching I’ve had along the way: My dad, Fuji Miki, Cal Fister, Gerry Richard and, of course, Linda Moore — a superb coach, supporter and friend.” First thing on your Bucket List? “Vegas anyone?” Favourite pastime between draws at cashspiels? “Definitely napping! A luxury I don’t get anywhere else in this world.” Mixed doubles in the Olympics — thumbs up? Thumbs down? And why? “Thumbs down. That means I would have to pick between curling with my ladies team or with my husband, and I don’t want to curl with my husband — I quite like being married!” One thing most people don’t know about you? “I have webbed toes.” Your ideal shot to win an Olympic gold medal: “Anything where the weight/line call is, “It’s perfect! Don’t fall on it!” 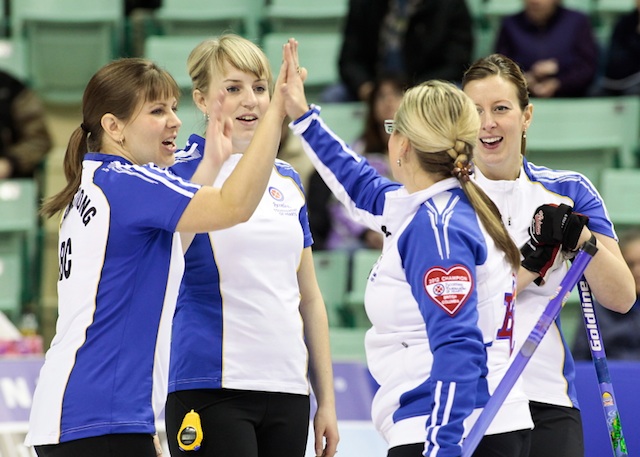