A Last-Rock Win for Team Canada

It came down to last rock, but Glenn Howard drew for one point to finalize an 8-7 win over a never-say-die USA team in Sunday evening action at the 2012 World Men’s Curling Championship presented by Ford Motor Company of Canada Ltd. in Basel, Switzerland. 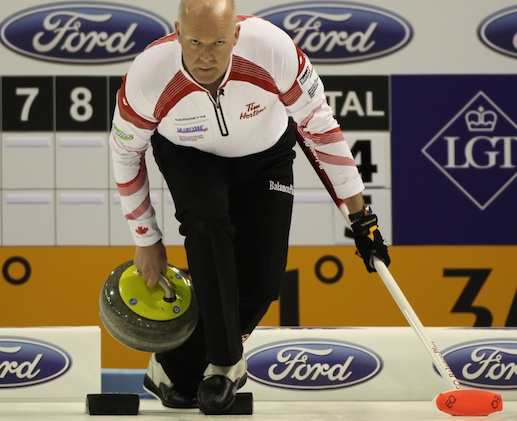 American skip Heath McCormick was called on to bail out his struggling team over and over, making impressive hits, rolls and draws to keep the Canadians from pulling ahead. Statistics showed Team Canada (88%) out-hitting and out-drawing the Americans (75%), but the score remained close throughout. USA took a single in the first end with hammer, and Canada was able to answer with a deuce in two. A soft tap in the third end gave McCormick a big three points. Canada kept the pressure on McCormick and his team of Bill Stopera, second Martin Sather, and lead Dean Gemmell, forcing the skip to draw or hit against multiple Canadian counters in almost every end. After the USA stole one in the ninth on a missed Howard double take-out, Team Canada lead Craig Savill made two perfect ticks to set up the final end and a chance for Howard to draw for the win. “It doesn’t matter that it was tight. We just wanted to get another win under our belts,” said Howard about the game. “Heath McCormick made some unbelievable second shots that kept him in the game. He made a couple of pistols in the ninth. If he misses any one of those, it’s going to be a blow-out.  But it was a great game and kudos to Team USA.” Canada (3-0) faces Norway (1-2) on Monday morning and Czech Republic (1-2) in the Monday evening draw. Follow Team Canada Quick access to Team Canada’s scores and standings can be found on the Curling.ca Mobile App and Mobile Web, as well as on the Canadian Curling Association website. TSN’s exclusive live coverage includes select Team Canada draws plus the playoffs and Final – and Video On Demand for fans who missed the games live. Go to TSN.ca and follow the link for VOD. 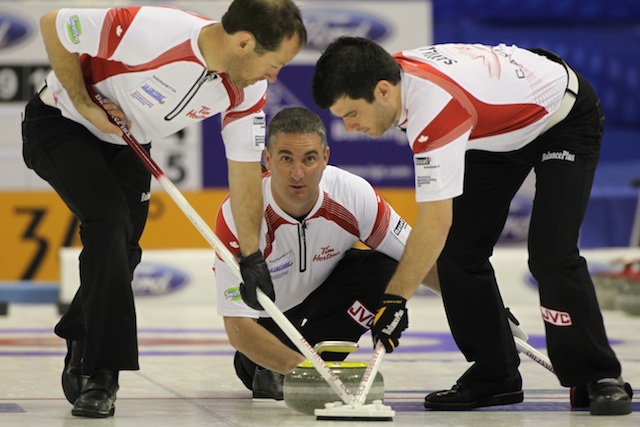