After an extra-end loss – their first – to New Zealand on Thursday afternoon, Team Canada charged back against China with a strong 8-7 victory in the final game of round robin play at the 2012 World Men’s Curling Championship. 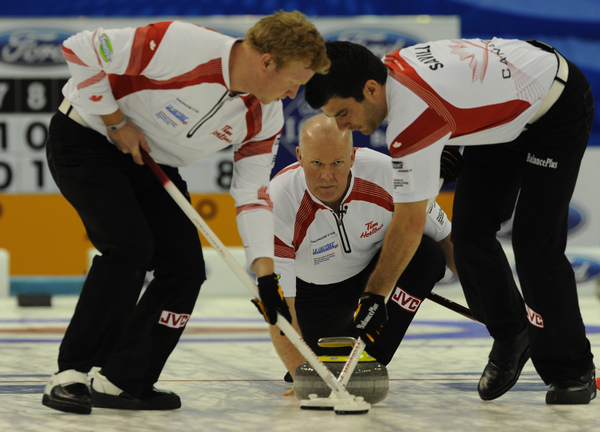 Putting the afternoon game behind them, Glenn Howard, Wayne Middaugh, Brent Laing and Craig Savill took control from the first end, scoring two points in one and forcing China to a single in two. In the third, Canada capitalized on some misses by the Chinese, scoring a big three points and holding China to a single in four. A blank in five and a deuce in the sixth gave Howard a 7-2 lead over opponents who appeared to be struggling, especially in the first half of the game. “We finished on a winning note,” said Howard afterwards. “We got to a nice start, 5-1 after three, and were able to cruise after that.” With the game under control, alternate Scott Howard came off the bench to replace Brent Laing at second. Even though it came down to Glenn Howard’s last rock in the tenth end – an easy hit to remove one Chinese counter – Team Canada appeared confident from the start. “The team adjusted really well to some frosty ice conditions and finished the round robin with the confidence they need for the playoffs,” said Team Howard coach Scott Taylor from Basel after the game. “They’re really upbeat about their performance so far and looking forward to the playoffs.” Canada finishes on top of the standings with a 10-1 record, and on top of the playing percentages as well, scoring 88 percent after round-robin play to lead all teams. Interestingly, China finished second in percentages (at 84 percent) but, with the loss to Canada, finished out of playoff contention, behind Scotland, Norway, Sweden and the late-rising Kiwis, who gave Canada its only loss in the tournament. Howard meets Scotland’s Tom Brewster – last year’s runner-up to champion Jeff Stoughton – in the Page 1-2 game on Saturday afternoon.  In round-robin play, Canada defeated Scotland 7-5. The final standings after the round robin are as follows: Canada (10-1), Scotland (8-3), Norway (8-3) in first, second and third place. Sweden and New Zealand (both at 7-4) will play a tie-breaker on Friday for fourth place and a ticket to the Page 3-4 game. Follow Team Canada Quick access to Team Canada’s scores and standings can be found on the Curling.ca Mobile App and Mobile Web, as well as on the Canadian Curling Association website. TSN’s exclusive live coverage includes select Team Canada draws plus the playoffs and Final – and Video On Demand for fans who missed the games live. Go to TSN.ca and follow the link for VOD. 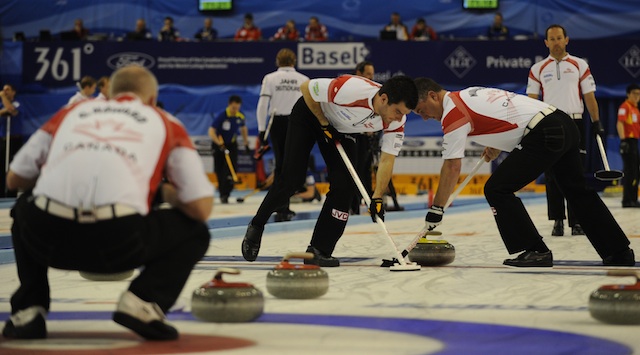