Canada into the Final with an Extra-End Win over Scotland

After a pick ruined a potentially winning draw in the tenth end, Glenn Howard drew the four foot in the eleventh to secure a 7-6 victory over Scotland in the Page 1-2 game and a ticket to the final of the 2012 World Men’s Curling Championship on Sunday. 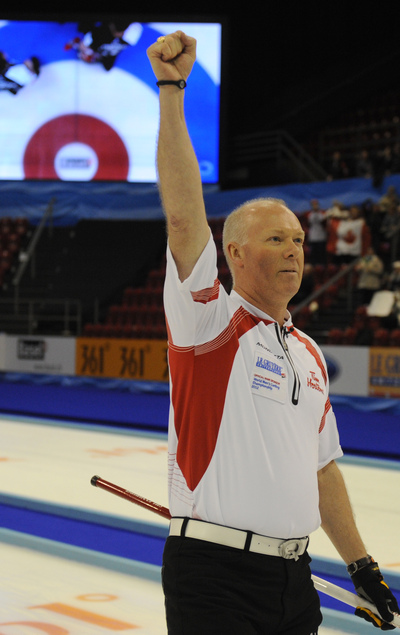 Canada now awaits the winner of this evening’s semi-final between Scotland and Sweden, who defeated Norway in the Page 3-4 game earlier in the day. This was a tight game, fittingly played in front of the biggest crowd of the week – 2500 people. Canada blanked the first two ends before opening the scoring with a single point in the third end. Scotland’s Tom Brewster then responded with a draw for one point in the fourth end. The fifth end was a battle for rock position. With a Scottish counter sitting on the button, guarded by a rock on the front four, and three Canadian rocks in the rings, Howard attempted a double take-out but just slightly missed the angle, giving up a steal of one. After trading singles, the seventh end saw lots of rocks in play. A slight miss by Brewster left Howard the chance for a tricky triple take-out, which gave Canada a huge four and a 6-3 lead. “We got an uncharacteristic miss out of Tom,” said Howard about the his big shot in eight. “We were looking at it and looking at it, and we ended up chiseling it and got four.” Scotland fought back to tie the game at 6-6 with a double in the ninth for two, and a stolen single point in the tenth when Howard’s last-rock draw picked and stopped just short of the Scottish shot rock. In the extra end, Scotland kept the pressure on, positioning rocks around the eight-foot circle and forcing Howard to a final draw for one, which sealed the 7-6 victory. “A gutsy win by Team Canada,” said National Team Coach Rick Lang. “An unfortunate break for Scotland and a great shot by our skip turned the game around in eight. We are in the final – can’t do any better than that at this point!” Howard agreed completely. “It was really good to win this one. We were pretty good in that game but I’d like to see us pick it up a bit. I don’t care if we curl 12 percent, as long as we win the game tomorrow. This is as far as we can be so far. We’re in the final, so we’ve made goal number three and we’re right where we want to be.” Follow Team Canada Quick access to Team Canada’s scores and standings can be found on the Curling.ca Mobile App and Mobile Web, as well as on the Canadian Curling Association website. TSN’s exclusive live coverage includes select Team Canada draws plus the playoffs and Final – and Video On Demand for fans who missed the games live. Go to TSN.ca and follow the link for VOD. 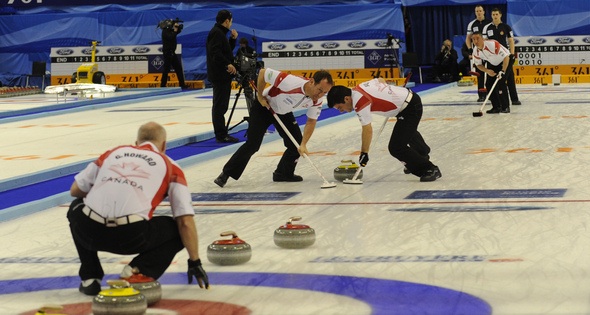