Canada’s Glenn Howard drew for one point in a tense extra end to capture the Men’s World Curling Championship final in Basel, Switzerland on Sunday. 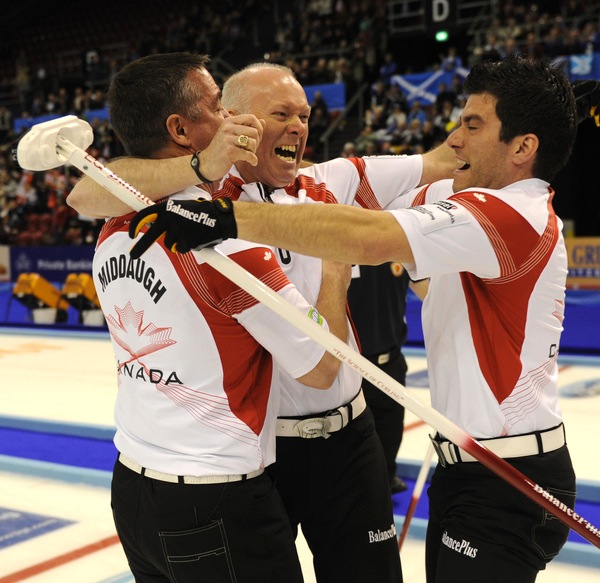 With the victory, Howard, Wayne Middaugh, Brent Laing and Craig Savill of the Coldwater and District Curling Club cap off a fantastic season in which they went undefeated in provincial play, lost only one game in the Tim Hortons Brier, and lost only once – after securing first place in the final standings – in Basel. For Glenn Howard, it’s his fourth world title (1987, 1993, 2007 and 2012). “I won my first world title twenty-five years ago and this one’s just as special, maybe more so,” said an elated Howard after the game. “This win feels special; they get more special because I don’t think I’ll be getting back (to the World Championship).” The game was a see-saw affair between two teams that had already met twice in the championship – both games (round robin and Page 1-2 playoff) won by Canada. Sunday’s final was close from start to finish. After blanking the first, Canada gave up a steal of one when a double attempt by Glenn Howard just missed and pushed a Scottish stone into shot position. But Canada responded in the third when Brewster’s draw was heavy, leaving Howard a hit for three. After a deuce by Scotland in the fourth end, Canada took a single in five for a 4-3 lead heading into the break. The second half was a tight battle as both teams used a steady combination of up-weight and quiet shots to get rocks into position. In the ninth, a pick on Brent Laing’s peel attempt allowed Scotland to force the Canadians to one point for a 7-6 lead without hammer heading into the final end. 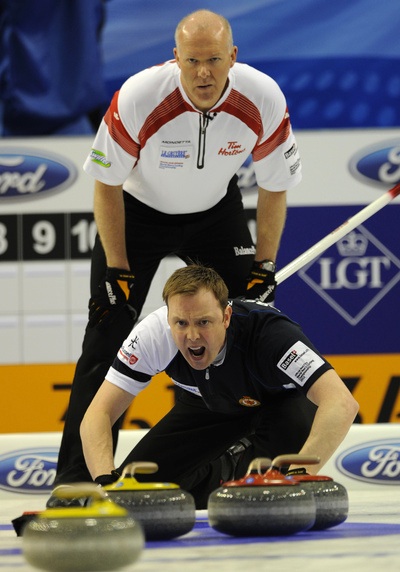 Brewster just missed scoring two with his last rock in ten when his attempt to remove a Canadian counter came up short. His single tied the game and gave hammer back to Howard. In the extra end, Craig Savill’s two perfect tick shots on Scottish centre guards kept the scoring zone open, and despite Brewster’s efforts to get rocks into position, Howard’s final draw against two Scottish counters was right on the mark. “I can’t give enough praise to my team, they’ve been fantastic all year,” said the happy skip about teammates Middaugh, Laing and Savill. “We hung in there. It wasn’t our A‚ game but we got it done with a B-plus‚ game.” Statistically, Scotland had the edge in team playing percentages (Brewster was 89 percent and Howard 81 percent according to World Curling Federation statistics) but with Craig Savill’s game-leading 90 percent and Wayne Middaugh’s 90 percent on hits alone, the Canadians made the big shots when they were needed. “I’m gutted,” said a disappointed Brewster after losing the final to Canada for the second year in a row.  “I thought we were the better team, I really did. I thought we played some great curling. An inch more curl on that shot in the tenth and we’re there.” The skip praised his young teammates, third Greg Drummond, second Scott Andrews and lead Michael Goodfellow. “Twelve months ago we were in the same position and we’re miles better than last year. We’ve made big improvements since last year on fitness and sweeping, and we’ve just got more experience. Our team played great here – what an effort. We’ve had a strong week here and we’ve got a big future.” Howard also had praise for his opponents. “Brewster and the boys threw everything at us – we were a little fortunate. He threw a good shot in ten and it didn’t curl – I don’t know why. I was worried watching it – if he makes it, it’s game over and he’s the world champion.” Howard summed it all up before heading off the closing ceremonies: “God, it feels good. It feels sweet!” 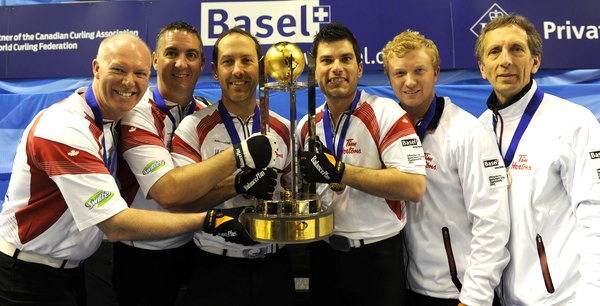