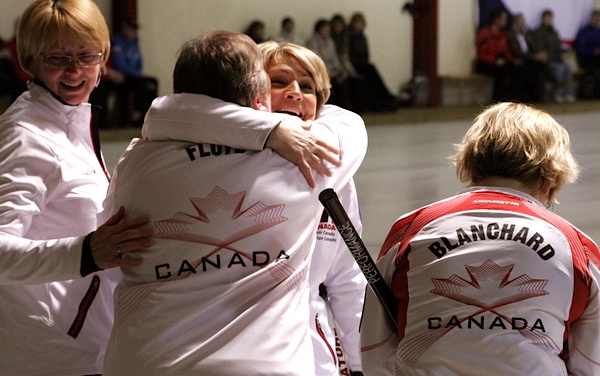 Hanlon and her team of Kathy Floyd, Judy Blanchard and Jane Arseneau dominated Scotland in the final, shaking hands on a 12-2 victory after seven ends. “We made it. Amazing, awesome, it’s unbelievable. We waited a long time for this moment,” said Hanlon after the win. “We have curled so many years together, off and on, and this is what we’ve dreamed of, I’ve been saying that all day. This is what we’ve been curling for all these years, just to be in this game, so let’s just play.” Scottish skip Barbara Watt was gracious in defeat. “We’re sorry we didn’t make a better game of it but they didn’t let us,” she said. “They played absolutely beautifully. If you had told us at the start of the week we would be getting the silver medal we would be absolutely thrilled and we are – absolutely thrilled. We weren’t in that game, they were just too good, that’s all.” 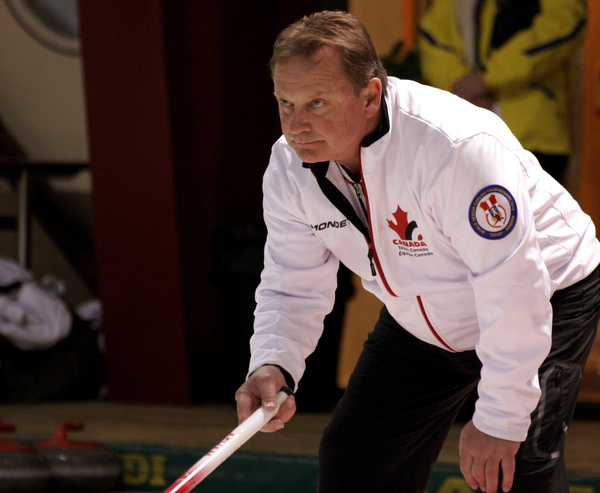 On the men’s side, Team Canada’s Kelly Robertson and his team of Doug Armour, Peter Prokopowich and Bob Scales came out on the short side of a 6-5 final against and an ecstatic Irish team skipped by John Jo Kerry, who made history by winning his country’s first-ever world curling championship title. The main turning point in the game came in the fourth end when Ireland hit a double take-out to score four points. Canada battled back and the teams were tied 5-5 going into an extra end, Canada with last stone advantage. However they could not make it count as Robertson was deep with his last draw. “It’s like the wind has been sucked right out of me,” said Robertson afterwards. “They played a good game – we gave up a four ender which was a little hard to take, but we came back. Actually, he made a great shot with his first one in the extra end. I had the chance to win it with a draw, I’ve had draw weight all week, but it’s the way it goes I guess. In the bronze medal games, Sweden won both the women’s and men’s side, defeating New Zealand 10-3 in women’s play, and Norway 8-4 in men’s. More news and photo galleries can be found on the World Seniors Curling Championship website.