Giving Back: It’s a Big Part of Curling Culture

Twelve years ago, Winnipeg’s Eric Dawson and his friend Kevin Wiebe were thinking about doing something fun to spruce up the curling season in Winnipeg – something like, say, taking it outside and playing on the Assiniboine River.  But the idea remained just that – a vague idea – until 2000, when Dawson’s father-in-law passed away unexpectedly as the result of a heart attack. 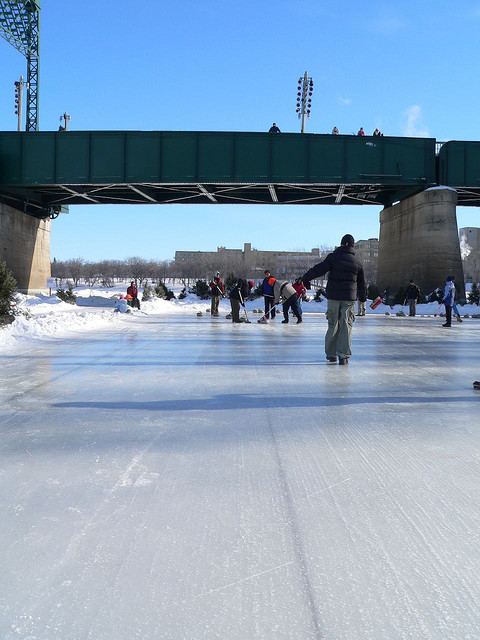 Suddenly the vague idea took on new meaning: why not hold an outdoor bonspiel that would provide a fun event for curlers and, at the same time, raise money for the Heart & Stroke Foundation, as a tribute to Dawson’s father-in-law? Since 2002, when twelve teams took to the river ice, the Annual Ironman Outdoor Curling Bonspiel has raised $37,000. This past February, 48 teams competed in the event, raising over $5,000. And what’s remarkable is that the Ironman is a completely volunteer-driven event. It’s all about curling, having fun, doing something different – and giving back. The Ironman isn’t unique in Canada. From coast to coast to coast, curlers of every level embrace events that not only provide opportunities for competition and socializing – the mainstays of the sport, after all – but also raise awareness and money for worthy causes. Bottom line: curlers love to give back. But why? And is the curling community unique? “I don’t know that the curling community is any more active charity-wise than other groups or communities,” says Chad McMullan, a curler, former Executive Director of the World Curling Tour, and owner of RockSolid Productions. “But generally speaking, the demographics show the curling community is of above average income so the ability to do so is certainly there. Combine that with a community feel and inclusiveness that pervades the sport and I think it is a natural that these events would take place.” A quick search through the online curling world reveals thousands of community events that promise a fun day of curling at the local club and an opportunity to raise money and support for charity organizations. At the grassroots level, curling for a cause is clearly thriving. But curling philanthropy is a growing presence at higher levels of the sport as well, and that’s a good thing for curlers, fans and the causes they support. Take McMullan’s Rock Solid Productions Inc., for example. The business side of the enterprise is all about bringing curling to school kids who might otherwise not be exposed to it through their family or community – we’ve all seen the ads, right? But using curling as a vehicle for good works is also part of Rock Solid’s philosophy. “It’s pretty much automatic that when doing an event, we look to see if adding a charity component is feasible,” says McMullan. McMullan and curling buddy Brian Chick started their “Curl for Something” as a response to requests from non-curling friends who wanted to give the sport a try. “The earthquake in Haiti took place at the time that we were planning the inaugural event so it was just a natural [decision] to charge a simple entry fee and donate it to the cause,” explains McMullan. After a successful first year and so much positive feedback from participants, McMullan and Chick decided to do it again, this time with Variety Village as the recipient. “Curl for Something” has become an annual event – and everyone wins. 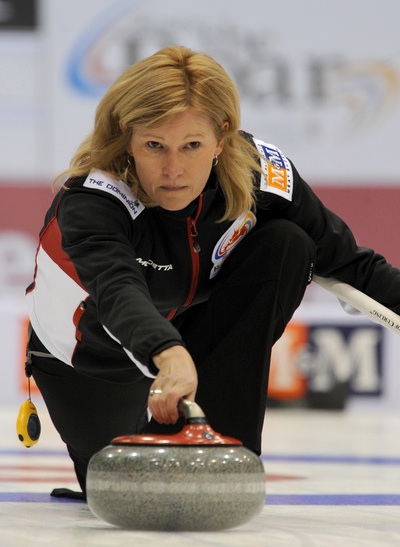 Sherry Middaugh: "We are able to give back, raising funds for worthwhile causes doing something we love to do. " (Photo Michael Burns)

Charity fundraising and curling connect just as strongly when The Dominion, one of the country’s largest property and casualty insurers and a supporter of curling at many levels, gets involved. The Dominion Curling Club Championship gives club curlers who aren’t destined for Scotties Tournament of Hearts or Tim Hortons Brier a chance to represent their province at a national level, but there’s a philanthropic expectation as well: teams compete off the ice by raising money for the Canadian Paraplegic Association. In Charlottetown in 2010, for example, participating teams raised over $30,000, which surpassed the $10,000 raised at 2009’s inaugural event.  It’s grassroots curling and charity fundraising on a national scale. In February of this year, The Dominion’s annual CPA Ontario Curling Classic bonspiel raised over $130,000. This event attracts curlers of all levels, including some big guns such as Team Glenn Howard and Team Sherry Middaugh, who took time out from a busy competitive season to participate. For Middaugh, taking part in charity events is something she enjoys for a number of reasons, including the obvious. “We are able to give back,” she says simply “raising funds for worthwhile causes doing something we love to do.” But for elite curlers like Middaugh, who devotes so much time and energy to high-pressure competition, it’s also a chance to kick back and have some fun. “It is a great way to round out a grueling competitive season,” she says. “Having fun, curling with others who are as passionate about the game as I am.” 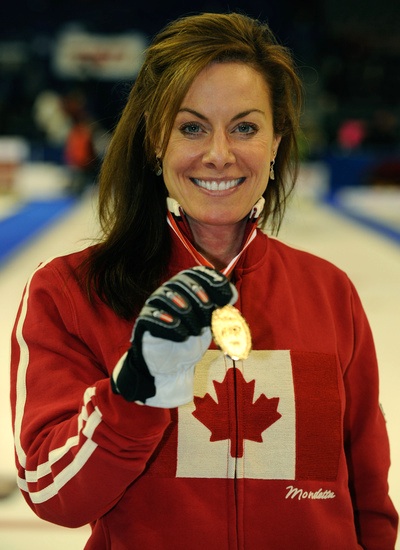 “This is always an easy one for me,” says Cheryl Bernard, Olympic silver medalist, when asked about her motivation for donating her time and efforts to charity events.   After the death of her father from a brain tumour, Bernard created the annual “Curl for a Cure” in support of the Canadian Breast Cancer Foundation. “Even before we won our Olympic medals, I have always felt athletes have a responsibility to give back and to use their platform to help raise awareness. Curlers are especially generous. We ran our event for five years and raised 1.3 million for the Canadian Breast Cancer Foundation all because curlers across Canada were so willing to donate yet more of their time. It was an incredible run and five amazing years that I hope I never forget.” As well as being the spokesperson for The Brain Tumour Foundation of Canada and donating her time to a variety of charitable causes, Bernard has also joined the Board of the Sandra Schmirler Foundation, perhaps one of the most familiar curling and charity partnerships, thanks to the annual telethon held on the first Saturday of the Scotties Tournament of Hearts. The Foundation’s presence at the Scotties is no surprise: Schmirler is remembered as not only one of the best curlers this country has ever produced, but also as a friend and mother who cherished family. The Foundation’s mission – to honour Sandra’s legacy and to raise funds for hospitals that care for premature and critically ill babies – reflects that commitment. It’s a completely collaborative event: high-profile curlers such as Schmirler’s former teammates Joan McCusker, Jan Betker and Marcia Gudereit are among the familiar faces on phone duty with non-curling volunteers; TSN’s curling announcer Vic Rauter makes the on-air pitch for donations; and during the final weekend of the Scotties and Tim Hortons Brier, curling fans in the stands reach into their wallets for cash to deposit in the “crowd sweep” conducted by competitors who aren’t in action on the ice. 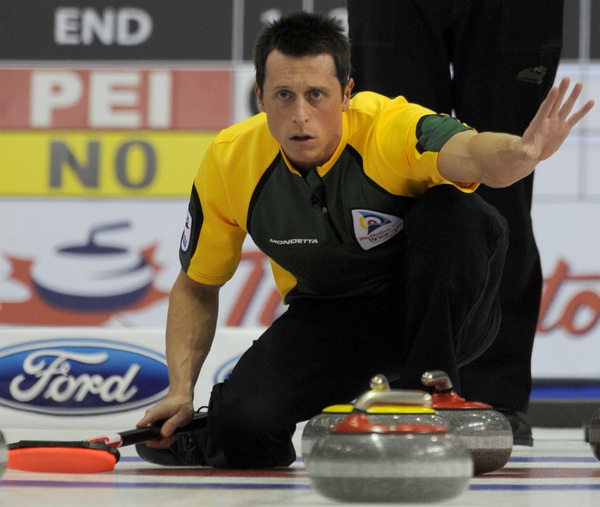 E.J. Harnden: "When we curlers have a chance to give back, whether it be through helping out with a charity event or helping out at our local curling rink, we jump at the opportunity without hesitation because it is our chance to support those who allow us to play the sport we love." (Photo Michael Burns)

“Our team has participated in the crowd sweep during all four of our Tim Horton’s Brier experiences,” says E.J. Harnden of Northern Ontario’s Team Brad Jacobs. “It is a special moment because it is one of the only times throughout the competition where all the players are working together to achieve a common goal, which is to help raise as much money as possible for an amazing cause as well as another way to continue the legacy of one of the greatest curlers of all time.” This season’s telethon and “crowd sweeps” raised well over $250,000 – the second highest amount in the Foundation’s history. “I think it is enjoyed equally by both the players and fans because not only is this another way for us to interact with one another,” says Harnden, “but we are all helping to contribute to a greater cause.” Lots of professional athletes align themselves with charity work; that’s nothing new. So what makes curlers unique? “To me the thing that makes curlers different from many other athletes, is that we do not view ourselves as any different from the people who come out to watch us play,” says Harnden. “We have a very good understanding of how much the fans, volunteers as well as sponsors mean to our sport or to any other sport for that matter.  Therefore, when we curlers have a chance to give back, whether it be through helping out with a charity event or helping out at our local curling rink, we jump at the opportunity without hesitation because it is our chance to support those who allow us to play the sport we love and also to use what some would call our ‘celebrity status’ in a positive manner to help others.” Of course, curling philanthropy isn’t always conducted on such a large scale. In Fergus, Ontario, Chris Taylor runs a one-day club event that was founded by her husband, Bill, a long-time member of the club. After Bill passed away in 1983 from emphysema, Chris took over the organization of a final bonspiel that allows Fergus Curling Club members to celebrate the end of another successful season. Somewhere along the way, the bonspiel winners started donating their prize money back, so Chris turned it over to the Lung Association in Bill’s memory – and a tradition began. The Bill Taylor Memorial has been the annual season-ending event in Fergus ever since. At curling clubs and events throughout the season, this scene is played over and over.  Whether it’s high profile or grassroots, curling culture in Canada is clearly committed to using the sport for the forces of good: to give back, generously. 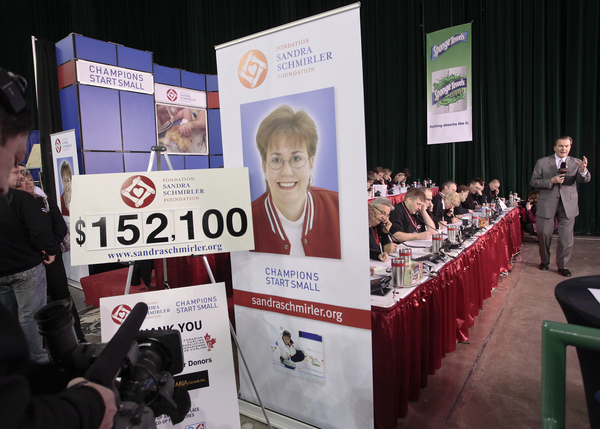