British Columbia is rocking with Capital One Rocks & Rings!

Three years ago, Curl BC signed an agreement and brought the Capital One Rocks & Rings program to the Metro Vancouver region as a pilot project. It proved to be such a success that it has been expanded, and by the end of this curling season, should have the program in every region in BC! 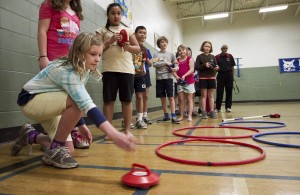 During the pilot year of 2009-2010, the Capital One Rocks & Rings Program had over 15,000 school children introduced to the sport of curling in their school, in the Metro Vancouver area. Last season (Year 2) the program was expanded to Vancouver Island, North West BC, Thompson Okanagan, and the Kootenay East regions and visited just over 20,000 students. Some of BC’s success stories: CurlBC has committed to managing this program in BC because it believes that it is generating enthusiasm for the sport among children that will result in the next generation of curlers starting down the path towards being active for life.

“I didn’t get a chance to say thank you!  The staff thought you were great and I had at least three kids tell me they were going to be curlers when they grew up!  THANKS SO MUCH!” – Teacher in BC