Most curling historians agree that the origins of curling date back to the 16th century when it was first played on frozen ponds in Scotland.  In those days, the last rock was essentially just that… a rock that had been collected from a riverbed or field. 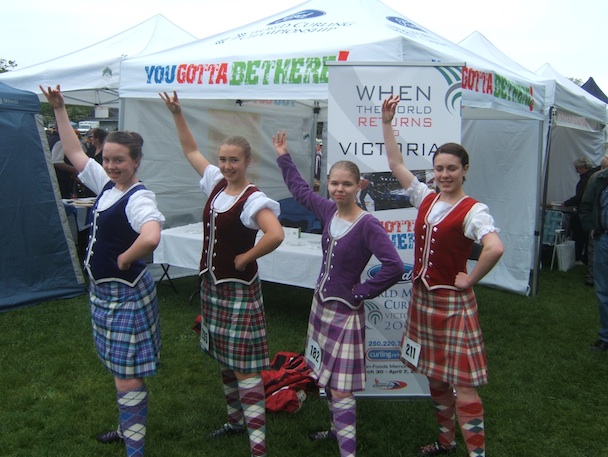 The promotions team for the 2013 Ford World Men’s Curling Championship – March 30-April 7 in Victoria’s Save-On-Foods Memorial Centre – took a trip back to the roots of the roaring game with a visit to the city’s longest running cultural event – the 149th celebration of the Victoria Highland Games & Celtic Fest, May 19-20 at Topaz Park. “The link between Scotland and curling made it a natural fit for us to be there to make sure everyone knows about the upcoming world championship,” commented a member of the volunteer team.  “It was a bit surprising that most people were aware of the event and many have already purchased tickets. It just shows how deeply the passion for curling is ingrained in the heritage.” The Scots have good reason to be excited about the championship based on past event history.  When the Ford World Men’s was contested in the Save-On-Foods Memorial Centre in 2005, David Murdoch battled to the final before losing to Canada’s Randy Ferbey as he captured a fourth world title. 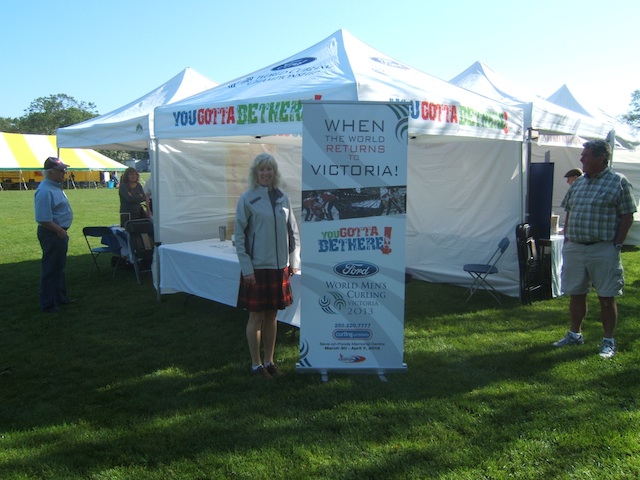 Scottish teams skipped by Tom Brewster also reached the gold medal game of the last two world championships, being defeated again by Canada on both occasions – Jeff Stoughton in 2011 and Glenn Howard in 2012. “The excitement throughout the community and enthusiasm of the volunteers has been amazing,” says Host Co-Chair Keith Dagg.  “Not only are we close to meeting our requirements for the week of the championship – more than eight months down the road – we don’t have enough shifts available for those who want to get involved in our spring and summer promotions.” The upcoming schedule will see the Ford World Men’s ambassadors at the Times Colonist Savings Open, June 5, 9 and 10; the Tourism Victoria and Victoria Chamber of Commerce Golf Tournament, June 19; and Victoria Highlanders FC home games on June 16 and 30. “You Gotta Be There” when the best curlers on the planet return to Victoria for the 2013 Ford World Men’s Curling Championship.  Excellent seats are available by clicking here.