City of Champions Looks Back on Record-Setting Brier History

The most legendary event in curling is coming back to Rexall Place March 2-10, 2013… and that means it’s time to dust off the record books because Edmonton has a reputation for rewriting history. 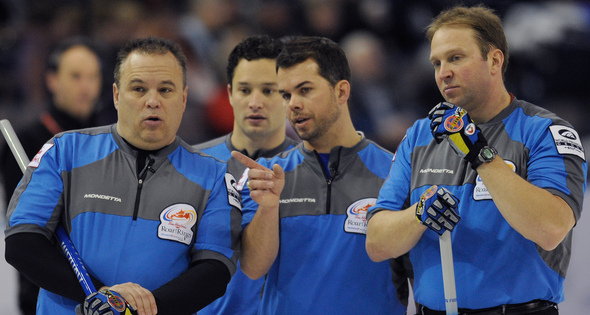 Randy Ferbey (l) with Scott Pfeifer, David Nedohin and Marcel Rocque, were winners in 2005, the last time the Brier was held in Edmonton (Photo Michael Burns)

The last edition of the Brier was staged in the Alberta capital in 2005 – the first year under the Tim Hortons banner – and a new benchmark for attendance was set with 281,985 fans packing the stands over nine days of intense competition. In the championship final hometown favourites – Randy Ferbey, Dave Nedohin, Scott Pfeifer and Marcel Rocque – defeated Nova Scotia’s Shawn Adams to set another record as the first team to win four Tankards with the same lineup. The Edmontonians finished Round Robin play with a 9-2 record, moving on to the 1 vs 2 Page Playoff where they downed Manitoba’s Randy Dutiaume to advance to the championship final.  For the third consecutive year they faced a Nova Scotia team – prevailing over Adams after a loss to Mark Dacey the previous year in Saskatoon. The “Ferbey Four” moved on for one more victory march in Victoria at the 2005 Ford World Men’s Curling Championship, putting the cap on a perfect season. The 2013 Tim Hortons Brier marks the sixth time the Canadian Men’s Curling Championship has been contested in Edmonton and, with the exception of Ontario’s Russ Howard in 1987, the winner’s circle has been the exclusive domain of the western provinces. The tradition started in 1954 when Edmonton’s Matt Baldwin won his first of three Briers – the fifth title for the Wild Rose province – in front of a crowd of 32,000 spectators.  It took nearly two decades, but the Tankard eventually returned in 1973 and was claimed by Saskatchewan’s Harvey Mazinke. Howard came through for the east in 1987 with brother Glenn, current defending Brier champ, at his side as third. But, Jeff Stoughton of Manitoba got the western theme back on track with a win at the city’s fourth Brier where 242,887 fans passed through the turnstiles to set a new attendance standard at the time. “There are obvious reasons we’re known as the City of Champions,” says Host Committee Chair Mark Johnson.  “The success of the Oilers and the Eskimos, as well as the Randy Ferbey and Kevin Martin teams and all the rest of our curling legends, speaks for itself.  But, our incredible base of fans and volunteers are the true champions… the passion and support for sports in this community is nothing short of amazing!” For those who are interested in playing a part on the volunteer team, apply on line by clicking here. “You Gotta Be There” to experience the excitement and drama of the 2013 Tim Hortons Brier – when the country’s best curlers compete for the game’s most historic title.  Click here to purchase your Full Event pass now.