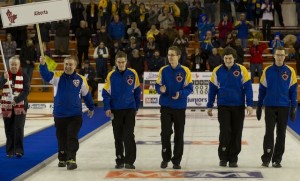 It will mark the ninth year of title sponsorship by M&M Meat Shops, Canada’s leading retail chain of specialty frozen foods. TSN, the official broadcaster of the CCA’s Season of Champions, will provide live and exclusive coverage across Canada of the women’s and men’s finals. “We are pleased to announce that the 2014 M&M Meat Shops Canadian Juniors will be hosted in Liverpool, part of Nova Scotia’s spectacular south shore on the Atlantic, commented the CCA’s Chief Executive Officer, Greg Stremlaw. “These young athletes are in for a real treat with a wonderful venue and ideal location for this championship to be hosted.” The CCA’s 14 Member Associations (10 provinces, plus Northern Ontario, Northwest Territories, Nunavut and Yukon) will once again have the opportunity to qualify for the 2014 M&M Meat Shops Canadian Juniors, as they will do so for the first time in 2013. The 10 provinces/territories with the best won-lost records at the 2013 M&M Meat Shops Canadian Juniors qualify for the championships, which begin on Saturday, January 18. Host Nova Scotia receives berths into both the men’s and women’s events. Teams representing the other four provinces/territories will then compete in a one-day double knockout at the Liverpool Curling Club on Thursday, January 16. This will determine which two teams from each gender advance to the 12-team championships, which is a round robin format, with the first place teams earning byes to their respective finals, while the second and third place teams meet in semi-finals. “The Region of Queens is delighted that Queens Place Emera Centre has been chosen for this prestigious national sporting event, “ said the Honorable John G. Leefe, DCL, Mayor, Region of Queens Municipality. “Our entire community will be well prepared to embrace the competitors, coaches, organizers, families and friends who will be making the Liverpool area their home for the 2014 M&M Meat Shops Canadian Junior Men’s and Women’s Curling Championships.” “We are delighted and honoured to be chosen to host such a renowned event,” said Host Committee chair Greg Thorbourne. “This is a fantastic opportunity to not only showcase our great region, but also bring a line-up of world class Junior curlers to our community. While this will mark the first national curling event for Liverpool, we are no strangers to championship curling. Liverpool has hosted many successful provincial championships over the past few years. The residents of the area, who will form most of the organizing committee, are excited to showcase their talents in hosting this great event.” Added Dave Andrews, President of the Liverpool Curling Club, “The executive and members of the Liverpool Curling Club are proud and happy to have this event coming to our area. We are looking forward to help make all the competitors, coaches, volunteers, and spectators enjoy their stay.” The Canadian junior men’s curling championship began in 1950 in Quebec City. Nova Scotia has won only one junior men’s title, that by skip Shawn Adams in 1993 in Trois-Rivières, Quebec. Alberta leads all provinces with 16 Canadian junior men’s titles, the latest by skip Brendan Bottcher of Edmonton, whose team won the 2012 renewal in Napanee, Ontario. Nova Scotia has captured three Canadian junior women’s crowns since the championship began in 1971 in Vancouver – in 1980 (skip Kay Smith in Charlottetown), 1997 (skip Meredith Doyle in Selkirk, Manitoba) and 2004 (skip Jill Mouzar in Victoria). Saskatchewan leads with 11 women’s titles. The men’s and women’s championships were contested separately until being combined in 1987 in Prince Albert, Saskatchewan. Nova Scotia has previously hosted four Canadian junior men’s and two Canadian junior women’s championships, the last in Truro in 1994. “We are proud to encourage our Canadian junior athletes and to support the incredible community spirit and professional competition that this event brings,” said Mac Voisin, Chairman and Founder of M&M Meat Shops. “As the title sponsor of the Canadian Juniors, we wish the Liverpool host committee all the best in staging the 2014 M&M Meat Shops Canadian Juniors.” The winners of the M&M Meat Shops Canadian Juniors will then represent Canada at the 2014 World Juniors, at a site to be announced by the World Curling Federation. Canada has won a leading 17 world junior men’s titles since 1975 and eight women’s crowns (Scotland leads with nine) since 1988. The last Canadian teams to win world junior titles were skipped by Saskatchewan’s Marliese Miller in 2003 in Flims, Switzerland and by Alberta’s Brendan Bottcher in 2012 in Östersund, Sweden. Meanwhile, the 2013 M&M Meat Shops Canadian Juniors are scheduled for February 2-10 in Fort McMurray, Alberta, with the winners representing Canada at the World Juniors in Sochi, Russia. For further information: Greg Stremlaw Chief Executive Officer Canadian Curling Association 613.834.2076 x117 Cell: 613.799.9993 [email protected] www.curling.ca Danny Lamoureux Director, Curling Club Development & Championship Services Canadian Curling Association 613.834.2076 x116 Cell: 613.878.3682 [email protected] www.curling.ca Greg Thorbourne Host Committee Chair 2014 M&M Meat Shops Canadian Juniors 902-354-8453 [email protected]