The promotions team for the 2013 Ford World Men’s Curling Championship was in the middle of the action for the Times Colonist Island Savings Open, June 5-10 at Uplands Golf Club, to make sure everyone knows the best curlers in the world are coming to Victoria next spring. 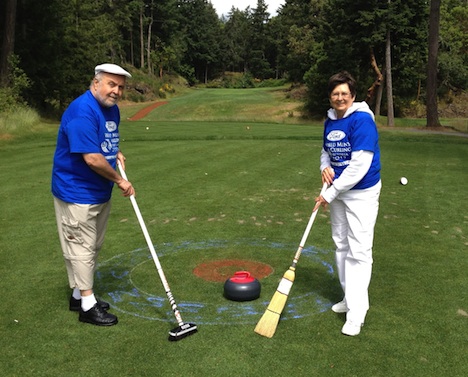 The first stop of the season for the Canadian Professional Golf Tour was won by California native Andrew Roque, closing out the tournament with an amazing run of seven consecutive birdies to card a final round score of 61. “Curling and golf are just a natural fit,” commented Keith Dagg, Co-Host Chair of the upcoming world men’s championship.  “There are so many curlers that spend their summers on the course, it only makes sense that we take advantage of the opportunity to be out there promoting the Ford World Men’s.” The volunteers were at the course Wednesday, June 5 for the Pro-Am as well as both days of competition on the weekend. It was back to the track at Olympic View Golf Club Tuesday, June 19 for the Victoria Chamber of Commerce German Auto Import Network Golf Tournament to sponsor the Closest to the Pin Contest on the par 3 11th hole.  Two Opening Weekend event passes to the Ford World Men’s Curling Championship were won by Sheldon Croder for the shot of the day. “The organizers gave us the go-ahead to paint in curling rings on the tee box and that really helped create a curling atmosphere out on the course,” noted volunteer Susan Jobbins.  “We drew a lot of interest from the players coming through our hole.” The 2013 Ford World Men’s Curling Championship is returning to the Save-On-Foods Memorial Centre March 30-April 7 – the scene of the excitement in 2005 when Team Canada’s Randy Ferbey captured his fourth world title. “You Gotta Be There” to see all the elite names in the international game compete for world honours.  Full Event passes are available now just by clicking here. 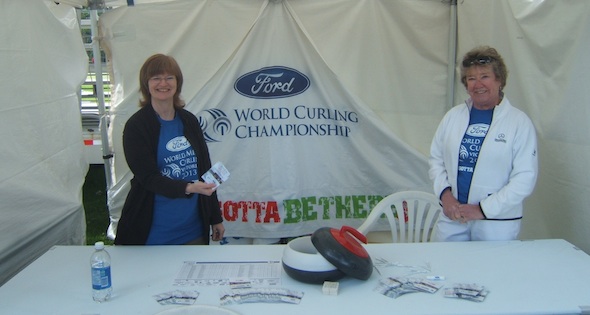