Royal Athletic Park has been the setting for a pair of exciting home games for the Victoria Highlanders FC over the past two weeks – and prime grounds for volunteers promoting the 2013 Ford World Men’s Curling Championship coming to the Save-On-Foods Memorial Centre, March 30-April 7. 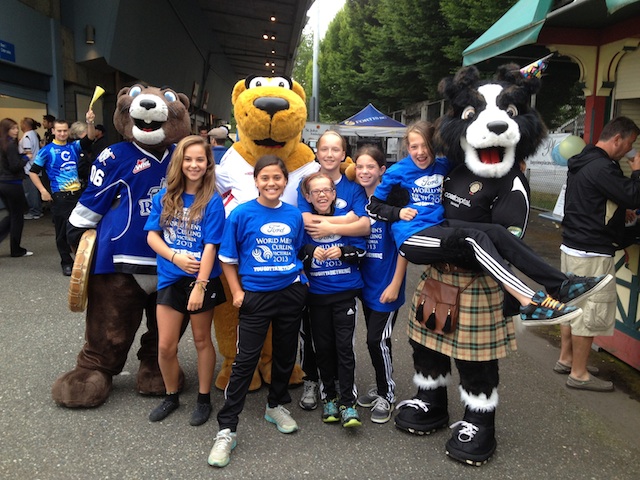 The promotions team was out in full force for the Highlanders’ match June 16 when the team lost by a 1-0 score to the Washington Crossfire in USL Premier Development League action.  They were back to cheer the home team on to a 1-1 tie with the Portland Timbers June 30 – distributing promotional material to the fans. The ball retrievers for the club wore Ford World Men’s t-shirts providing additional exposure for the event. “We want to be right in the middle of the action any time passionate sports fans gather in the community,” says Keith Dagg, Co-Host Chair for the 2013 Ford World Men’s Curling Championship. “Victoria has a rich heritage when it comes to soccer… it’s been part of our culture for the past century. We know these are the people that are going to love the competitive spirit that’s inherent in a major international championship.” Professional soccer blossomed in the “Garden City” in 2008 when local businessman Alex Campbell recognized that the city was ready for a regular diet of top-flight players after the highly successful FIFA U-20 Men’s World Cup in 2007. Victoria was one of six Canadian centres to host the next generation of the game’s brightest stars in the world tournament. The Highlanders have become an integral part of the sporting scene in Victoria, generating a strong following among local youth.  The organization has focused on initiatives that encourage participation in the game such as soccer camps and coaching support for under-18 players that are aiding in the development of new talent on Vancouver Island. “Obviously, soccer and curling are very different sports,” comments Dagg, “but whenever you have the opportunity to see some of the best athletes in any sport compete for a championship, you gotta be there.  We’re trying to get out the message that the Ford World Men’s will be bringing the very best in the game to the city!  And, like the soccer proponents, we understand the importance of involving our youth in the experience.” The Ford World Men’s promoters will return to the pitch Saturday, July 7 when the Highlanders take on the North Sound Seawolves.  A pair of envelopes containing two Opening Weekend passes to the championship will be placed in the stands for the Lucky Seat Contest. “You Gotta Be There” to experience the excitement of the 2013 Ford World Men’s Curling Championship.  The best seats in the house are available now by clicking here.