Moose Jaw’s Matriarch of Curling is Pumped for the Cup

It was 1934 when Mickey Gower threw her first curling rocks down the bumpy ice surface during high school play at the local rink in Central Butte, Saskatchewan, in an era when parents had to supply the stones. 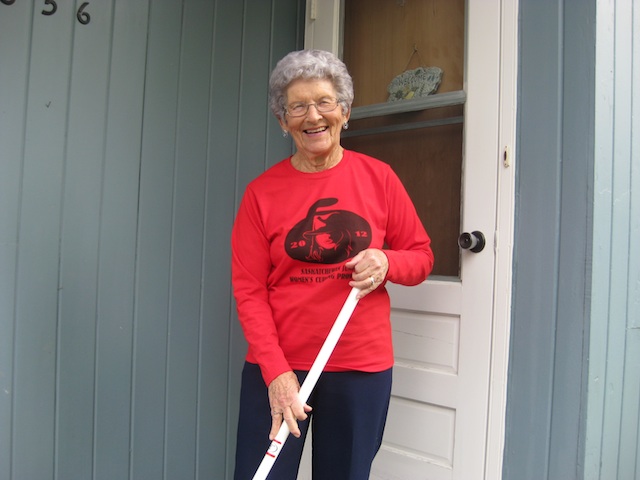 Mickey Gower after 70 seasons of curling: “I’ve enjoyed every minute of it and I certainly encourage the young people today to get involved… it’s a wonderful game.” (Photo Andrea Stevenson)

The rural setting was a long way from the scene this past April at the Ramada Hotel in Regina where she was introduced as one the 2012 inductees to the Saskatchewan Curling Association’s Legends of Curling Honour Roll – a distinction reserved for those who stand above all the rest for outstanding achievements and contributions to the sport. The tribute  was virtually a no-brainer, according to Gord Widger, chair of the Legends of Curling committee that was responsible for assessing the qualifications of potential members.  “Based on her credentials she was easily a first ballot selection.” Looking back on some seven decades of involvement in curling, and acknowledging her pride in the recent recognition, Gower sums it up in one simple statement, “I’ve enjoyed every minute of it and I certainly encourage the young people today to get involved… it’s a wonderful game.” As for her thoughts on the 2012 Capital One Canada Cup when 14 of the best teams in the country will take to the impressive new ice surface in Mosaic Place November 28-December 2:  “It’s just a great thing for Moose Jaw.  I’ve already got my ticket and I’ll be there to see it all.” With an upcoming birthday July 26th, the city’s most inspirational curler will become 93 years young, but she has no intention of cutting back on her schedule.  Gower is preparing for another three-games-a-week season.  In the summer months she keeps herself occupied with three or four rounds of golf a week. “She curls every Wednesday and Friday with the Seniors’ as well as Thursday in the Ladies’ League,” says son Gregg Gower, who shares the family’s passion for sports.  “Mom has had an eight-ender in curling and a hole-in-one in golf. I haven’t had either one yet.  I’m 60 and just amazed at what she does… I only hope I have those same genes!” “I’ve always called her the social convenor… she just had a way of getting people together and starting up different events and leagues.”  Among her organizational achievements are the Nifty 50’s, the Emerald League and the Ladies’ Masters League for curlers over the age of 60. 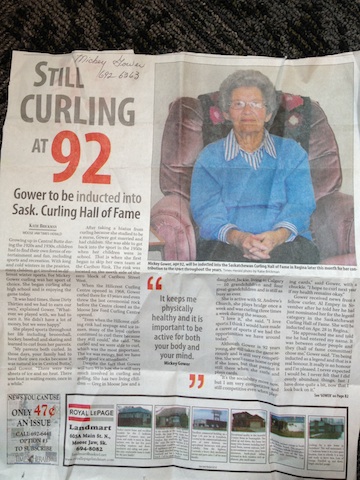 A strong advocate for the introduction of the province’s Master Women’s competition, she has curled in the event every year since its inception, including this past season in the community of Whitewood. An executive member of the Saskatchewan Ladies Curling Association for several years, serving as president in the 1977-78 season, she has also been active as a volunteer when Moose Jaw hosted major events including the 1979 World Men’s Junior Curling Championship and the 1994 Senior Men’s Curling Championship.  As a coach she has accompanied women’s teams to various championships across Canada. After some time away from the game following her high school years, Gower got back into curling in 1950 at Moose Jaw’s Caribou Curling Club.  But, the Hillcrest Curling Club was the place she really called home, playing there for all 43 years of its existence, right up until its closure last year for the move to the Moose Jaw Ford Curling Centre.  “I was there to see the opening and I was there to see the closing.” Leslie Glova, manager of the Hillcrest prior to taking on that role for the new facility at Mosaic Place, recalls the closing weekend festivities.  “I believe she was the only one who had been a member at the club every single year of its operation.  We had a special plaque made for her and gave her the honour of throwing the last rock.” Glova says it was a thrill to see Gower out on the ice last season in the new Moose Jaw Ford Curling Centre.  “She’s such a sweetheart and so quick-witted and just loves the game.  And, up until the past year she was still throwing from the hack… she’s started using the stick, but she’s still competitive… and she still likes to bonspiel.” While she remains committed to her three-games-per-week schedule, Gower admits to a bit more of a relaxed approach.  “I always used to skip, but now I’m quite happy playing lead.  I don’t really enjoy the pressure of throwing the last stones anymore.” “You Gotta Be There” along with Moose Jaw’s very own curling legend November 28-December 2 for the 2012 Capital One Canada Cup in Mosaic Place.  The best seats in the new building are on sale now just by clicking here.