Curling History’s in the Making for 2013 Scotties

Canada Day celebrations in Kingston’s Confederation Park, commemorating the bicentennial of the War of 1812, included a corps of volunteers promoting the 2013 Scotties Tournament of Hearts when the best women’s teams in the country will battle for the national curling title. 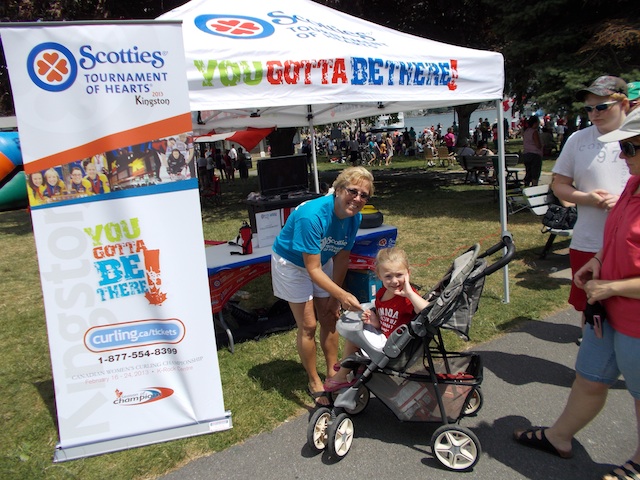 Two centuries ago the Upper St. Lawrence River represented a lifeline for every soldier, sailor and weapon so integral to defending against the invasion of American troops.  Next year, from February 16-24, the scenic waterway will serve as a backdrop for the classic curling championship that will be contested in the K-Rock Centre, situated at the heart of Kingston’s historic downtown. Event promoters were in the midst of the overflowing crowds that gathered in the downtown park overlooking the marina for a Canada Day party featuring a War of 1812 re-enactment along with live bands performing on the outdoor stage and an evening fireworks display to close out the festivities. “Our volunteers were out there all day spreading the word on the Scotties,” noted Promotions Director Betty Bush.  “It was a time for everyone to celebrate our national pride and recognize our city’s role in early Canadian history… but for us, it was also an opportunity to let the community know that we’ll be making history once again when the Scotties Tournament of Hearts comes to Kingston for the very first time next February.” It was a busy day for the Scotties ambassadors handing out event information, golf tees, magnets and the ever-popular tattoos for the youngsters.  And, they were right back at it July 7 with media partner FLY FM’s road crew for the city’s annual Sidewalk Sale. The next stop on the summer promotions tour is the Kingston Buskers Festival July 12-15 with an eclectic array of street performers appearing throughout the downtown district. “We want to make sure everyone drops by to see us when we’re out at these events,” says Bush.  “There’s always a chance to win a Scotties gift basket or two Opening Weekend Scotties ticket packages!” “You Gotta Be There” in the K-Rock Centre when the Scotties Tournament of Hearts makes its first trip to Kingston.  Take your place in history by clicking here for tickets today.