The City of Lloyminster straddles the Saskatchewan/Alberta border midway between Saskatoon and Edmonton.  The region is renowned as the heart of Western Canada’s curling country – making it prime territory for the promotion of the 2013 Tim Hortons Brier. 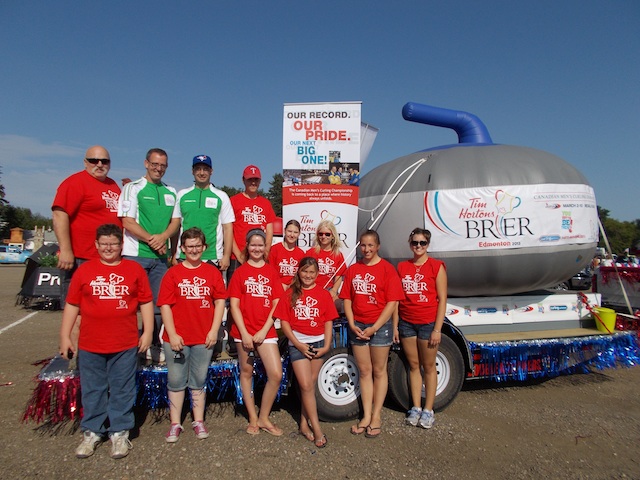 The Brier volunteers were out in full force July 11 to take part in the Colonial Days Parade, the opening celebration for the city’s annual four-day summer fair. “Saskatoon hosted last year’s Brier and with it coming back to Edmonton in 2013, Lloydminster is a natural fit for our promotions team… especially given the strong support in the community for everything relating to curling,” said Host Committee Chair Mark Johnson.  “The stretch between the two cities is clearly Canada’s hotbed for curling.  Just look at the numbers… we hold the all-time Brier attendance record and Saskatoon still sits at second place.” A large contingent of local curling enthusiasts took part in the event including Scott Manners and Ryan Deis who represented Team Saskatchewan at the 2012 Brier, ASAA High School Provincial Champions Karli Makichuk and Samantha Braun, and Sydney Lake, winner of the 4H Provincial Curling Championship. They were joined in the parade by members of the Lloydminster Junior Curling Program and the Lloydminster Curling Club. The busy summer promotions tour continues with appearances scheduled for Edmonton’s Capital Ex parade July 19, the Leduc Main Street Festival July 20 and the Big Valley Jamboree parade August 2 in Camrose.  The volunteers will also be on hand to distribute event information throughout the week of Capital Ex, July 20-29, at the Taste of Edmonton festival July 28 and the Heritage Festival August 6. The Host Committee is still actively recruiting volunteers for the promotions drive as well as for various positions during the week of the Brier, March 2-10, 2013.  Register online just by clicking here. “You Gotta Be There” when the Tim Hortons Brier returns to Edmonton’s Rexall Place – the scene of the record-setting Brier in 2005.  Full event passes are on sale now by clicking here. 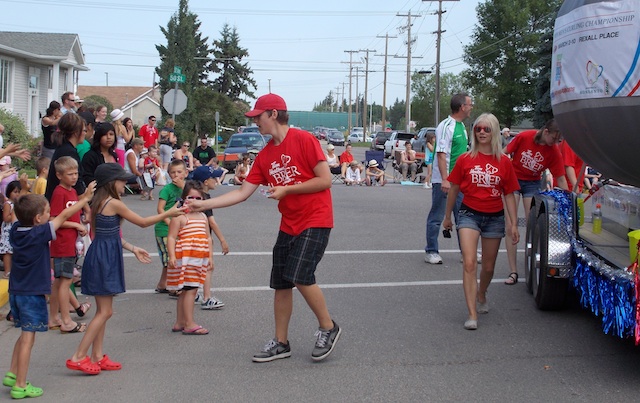