The streets of downtown Moose Jaw came alive July 5-7 for the annual Sidewalk Sale, and volunteers for the 2012 Capital One Canada Cup of Curling were right at the heart of the festivities. 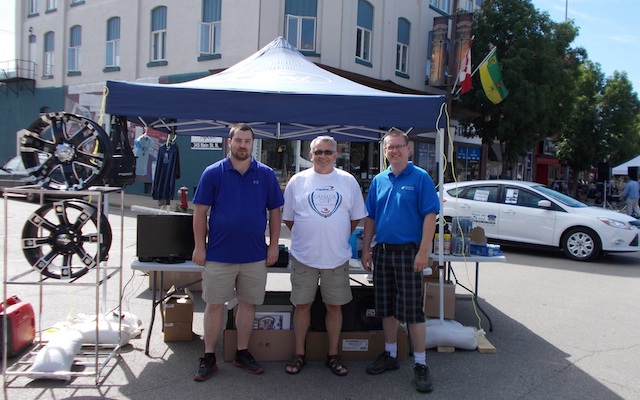 Starting out as a clearance promotion for local retailers in the 1970s, the sale has been energized with the resurgence of the city’s core to become a full-blown festival featuring live entertainment and an outstanding selection of food.  This year the summer gathering rose to new heights as 15 Wing Moose Jaw, home of the Canadian Forces’ legendary Snowbirds aerobatics team, partnered with the city for a “Salute to Moose Jaw”. “The Sidewalk Sale has taken on an entirely new feeling thanks to the rejuvenation of our downtown,” said Danielle Sicinski, Host Chair for the Capital One Canada Cup.  “The involvement of the base this year just made it that much more special… and a perfect place for our people to let everyone know that one of curling’s most important events is coming to the city later this year.” A Snowbirds fly-by over Main Street July 5 marked the opening of the event and they were back two days later for the festival wrap-up along with F18’s and the Hawk One Demonstration Team – a tribute to the Golden Hawks six-plane squad that showcased Canada’s expertise in the air in 1959. Capital One Canada Cup promoters were also on the scene for “The A-Moose-Ing Race” a five-hour test that combines traditional race elements such as endurance, speed and athletics – as well puzzle-solving skills.  Two-person teams made their way throughout the city, running, walking or riding public transit, to reach 10 of the designated checkpoints. Curling and country came together July 14 and media sponsor Golden West Radio was there to represent the first Season of Champions event of the year at the Craven Country Jamboree – where fans have been partying to the sounds of the biggest names in country music for the past three decades.  This year the site, situated in the Craven Valley just north of Regina, hosted international stars Brad Paisley and Alan Jackson. The Capital One Canada Cup promoters have a home stand scheduled July 25 at Ross Wells Park, serving as game day sponsors when the Moose Jaw Miller Express of the Western Major Baseball League take on the Saskatoon Yellow Jackets. “You Gotta Be There” for the 2012 Capital One Canada Cup, November 28-December 2 in Mosaic Place – Moose Jaw’s new state-of-the-art arena.  You can purchase your full even pass by clicking here.