The hottest time of the summer season in Edmonton is Capital Ex, the city’s annual exhibition running from July 20-29 at Northlands.  The promotions team for the 2013 Tim Hortons Brier – the Canadian Men’s Curling Championship – made the most of the opportunity to publicize the event. 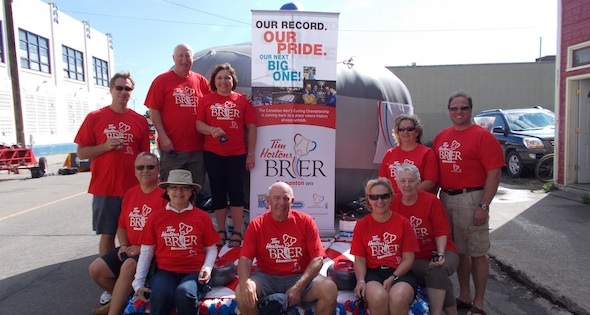 The official launch of the fair came with the Capital Ex Parade July 19 and the Tim Hortons Brier float was one of more than 130 that made their way through the streets of downtown.  The volunteers were joined by special guests Randy Ferbey and Marcel Rocque, members of the legendary Ferbey Four that made history at the 2005 Edmonton Brier, becoming the only team to win four titles with the same lineup. “We really appreciate all the work our volunteers put in to decorate the float and take part in the parade,” said Host Chair Mark Johnson.  “And it was great to have Randy and Marcel, two of our most respected sports personalities, on board as well.” The volunteers will be on site with media partner 630 CHED throughout the fair distributing promotional material and encouraging fair-goers to play the Rocks and Rings curling game. The origins of the summer fair, known for many years as Klondike Days, date back to 1879.  In recent years it has attracted between 700,000 and 800,000 visitors. “It’s one of Edmonton’s longstanding traditions and with that many people gathering in one place, it’s an excellent opportunity to promote the Brier,” noted Johnson.  “ And with the city getting ready to host our sixth men’s championship, the Brier is also becoming something of a local tradition in its own right.” The volunteers also pitched their tent for the festivities at the Leduc Main Street Festival July 21.  The annual celebration sponsored by local businesses featured street performers, a muscle car show, farmers market, children’s activities and an art walk.  Prizes were awarded to participants in the Brier bean toss game. Leduc will be hosting a prestigious curling event of its own this year when the men’s provincial playdowns take place February 6-10.  The winners will wear Alberta colours in the 2013 Tim Hortons Brier March 2-10 in Rexall Place. The Host Committee extends thanks to the many volunteers who have been working so hard to promote the event and is still looking for more recruits. Anyone interesting in getting involved in one of Canada’s major sports championships can register online by clicking here. “You Gotta Be There” when the country’s top shooters come to Edmonton for the 2013 Tim Hortons Brier.  The best seats in the house are on sale now – get yours today just by clicking here.