Curling in July. Why not?

Ah, summer! Season of sunshine, golfing, relaxation, barbeques on the deck – and bonspiels. Bonspiels? Of course! Across Canada, curlers are ignoring this year’s searing temperatures and stepping out on the ice as if it were January. Look at those intrepid curlers at the North Bay Granite Club in Northern Ontario for example. For twenty-four years, members had participated in an annual summer bonspiel an hour and a half away in New Liskeard, but that event’s “unfortunate demise” was a call to action for North Bay curlers. “Without debate, we picked up where our friends were forced to leave it,” says Bobby Ray, Granite Club’s Manager. So it was all hands to the wheel in order to host a first-ever July spiel in a club that had never even put in summer ice. 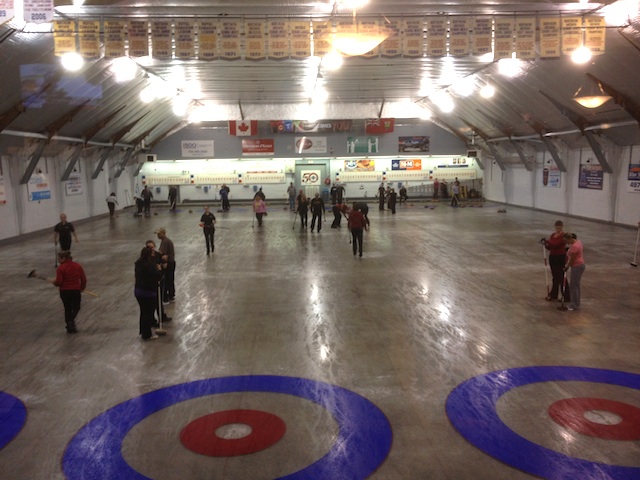 “Jon Wall of the Ottawa Curling Club spent the week prior to the Summerspiel working non-stop to provide us with excellent summer ice, the first to be installed in the North Bay Granite Club.”(Photo Bobby Ray)

Those “hands” included Granite’s Men’s Section President Jeff Miller and local Cogeco North Bay News anchorman, Greg Estabrooks, who together got the ball rolling, recruiting committee members and spreading the word to the community and beyond. One challenge was finding someone to make summer ice in temperatures that regularly soared to 35 degrees Celsius. “We cannot thank our volunteer iceman enough for his expertise and hard work,” says Ray. “Jon Wall of the Ottawa Curling Club spent the week prior to the Summerspiel working non-stop to provide us with excellent summer ice, the first to be installed in the North Bay Granite Club.” Twenty-eight teams – only ten of them local – made up the draw for the first annual North Bay “Rockstar” Summerspiel. They came from Ottawa, Toronto, Sudbury, Powassan, Sturgeon Falls, New Liskeard, Mattawa and Duluth (Minnesota) to partake in not only curling, but live entertainment, food galore, and karaoke (which, according to Ray, provided many of the weekend’s “most memorable moments”). In other words, the inaugural North Bay Summerspiel was much like any other bonspiel taking place across Canada during the regular season: curling on the ice, socializing off it. “I think all the curlers enjoyed the “Rockstar” theme, and karaoke was certainly popular even after the dinner competition,” reports Ray.  “It’s safe to say the North Bay Granite Club did not clear out at 2 a.m. either evening. Even after the bar was closed, a number of newly confident singers shone to the wee hours!” 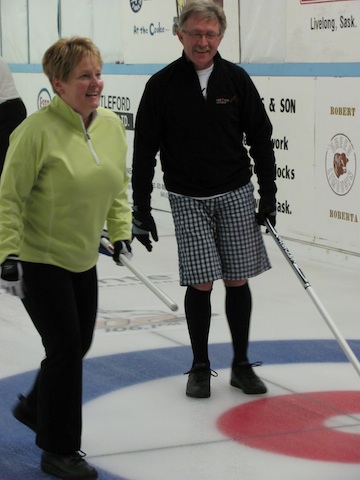 Out west, curlers were also stepping out on the ice, this time for the 16th Annual Livelong Summerspiel in Livelong, Saskatchewan. It started – as so many events do – as a fundraising idea. In the mid-1990s, the board of the Livelong and District Recreation Association (LADRA) was casting around for some way to finance the replacement of the curling club’s compressor and turned its attention to the success of the nearby Irma (Alberta) Summerspiel. Why not try the same thing in Livelong? According to long-time volunteer Roxy Bauman, a committee quickly formed. The ‘Fab Five’, consisting of locals Tom Wilkinson, George Bonnet, Blake Johnson, Victor Hamm and Stew McCarthy, along with Buster Bodnar, President of LADRA, and a few others, put their heads together. “They came up with a plan to host a 32-team summerspiel on two sheets of ice over eight days, combining the final day with the annual fair, Livelong Live-It-Up Day,” says Bauman. The Livelong Summerspiel has had a few challenges with ice-making over the years, including this July, when the power went out for 28 hours just as the ice was going in, reducing the amount of time available to prepare. “We have had years when the power went out during curling,” remembers Bauman, ”which fortunately was only for a few hours. The ice had to be re-prepared and games had to be re-scheduled.” Originally, it took as many as six men to flood the ice: one operating the nozzle, and the others keeping the hose out of the way. “This took a lot of commitment by a number of volunteers which led to inventions to make the task easier,” says Bauman, citing the old adage necessity is the mother of invention.  “A reel was invented with a remote control to aid in returning the hose, and ‘hangers’ were added to help keep the hose off the ice – thanks to the creative farmers in the area. Now a single person can manage flooding the ice, but of course help is needed to put in the rings and lines.” Adaptations and additions over the years have kept people coming back: adding golf and bowling to the agenda, changing the dates to avoid conflicts with other summer events, and offering a Sturling (two-man teams, no sweeping) competition, which appeals to the older demographic. “From the feedback that we get, everyone has a good time,” says Bauman, noting how many teams return year after year. “It seems that no matter how many teams show, whether it be 17 or 35, we still manage to make money – which is our ultimate aim.” Back in North Bay, the plan was simply to provide some curling fun during the hot summer, and Granite’s Bobby Ray is convinced that the inaugural event will see life again next year, thanks to the enthusiastic response of the participants. “The Summerspiel Committee could not have been happier with the feedback,” he says. “There was a ton of work that went on behind the scene leading up to the event, during the festivities, and still today, but we are all willing to step up to the plate again next year and I know our guests are looking forward to it.” 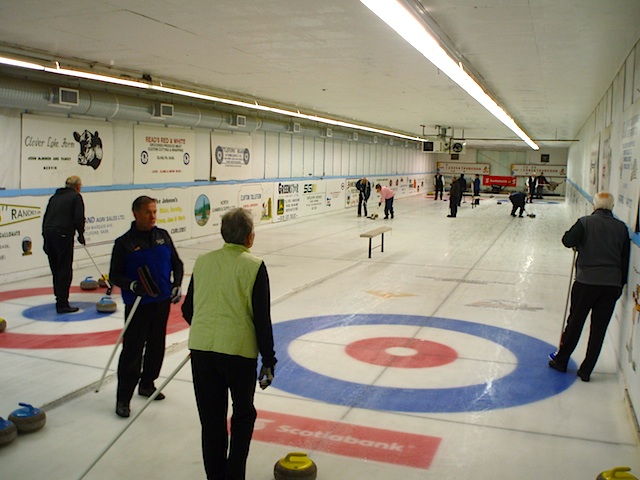 The 16th Annual Livelong Summerspiel: “From the feedback that we get, everyone has a good time,” (Photo courtesy R. Bauman)